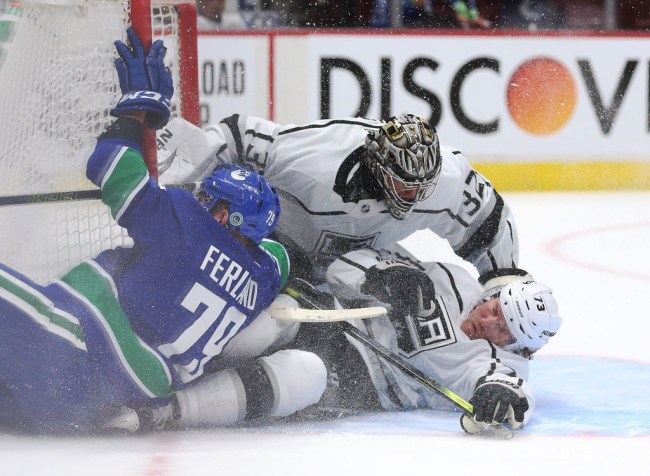 One of the best things on sports Twitter is when franchises in the same city chirp their brethren’s opponent. More often than not it’s relatively funny and makes the team’s account seem a little less ‘professional’ which is refreshing.

Sometimes it backfires though and on Thursday night it backfired on the Los Angeles Kings big time.

During Game 3 of the NLDS between the Dodgers and Nationals the Kings’ official account decided to throw a subtle jab at the Nationals with the Dodgers on top 8-2 in the sixth inning. The Dodgers went on to win the game 10-4.

Now, of course, the Nationals rallied during Thursday night’s Game Five to take the series in dramatic fashion. The Dodgers called on Clayton Kershaw in the eighth inning up 3-1 but he gave up back-to-back dingers on consecutive pitches making it a 3-3 game before the Nats eventually won 7-3 in extras.

You really do hate to see it.

That’s not the end of the story though, not even close.

The same night the Dodgers fell out of the playoffs the Kings visited the Canucks and you guessed it, lost 8-2.

That is about as bad as sports Twitter karma goes. The Nationals were sure to remind the Kings of their scoreline on Thursday night.

It’s also not like 8-2 scorelines are common in the NHL either, but the sports gods do not rest when there is payback and content to be made. The only way this could have been any better is if it were the Capitals that laid that score on the Kings on Thursday night, that would’ve been the undisputed twitter karma moment until the end of days.