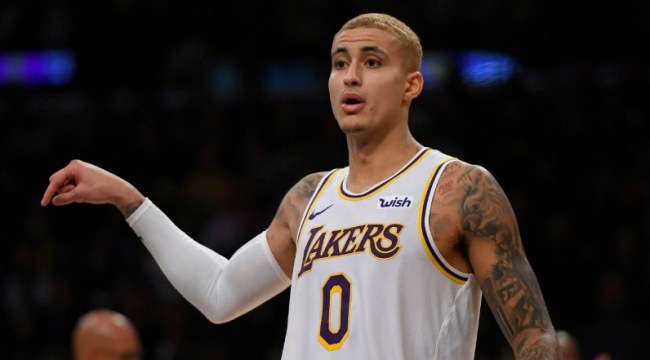 Kyle Kuzma could be on his way out of LA pretty soon.

According to Sam Amick of the Athletic, the Lakers are willing to listen to trade offers for the Kuzma.

Will Lakers general manager Rob Pelinka eventually send him packing to upgrade the Lakers’ roster for a title run? As our Shams Charania reported Friday, teams are monitoring his situation and wondering whether he can be had before the Feb. 6 trade deadline. What’s more, sources now say the Lakers have shown a recent willingness to listen to pitches for Kuzma.

And … we’re off — sort of. From the Lakers’ perspective, this open-phone-lines approach is merely a case of Pelinka doing due diligence as opposed to having substantive discussions. If only because nothing of real interest has come their way — yet.

Apparently the Sacramento Kings are interested in Kuzma and may part ways with Bogdan Bogdanović, who is set to become a restricted free agent after this season but declined to sign an offer made by the team this year.

Sacramento is among the teams that has tried to engage the Lakers in Kyle Kuzma trade talks, league sources say. The Kings know they would have to include sharpshooter (and soon-to-be restricted free agent) Bogdan Bogdanovic, for starters, in a Kuzma deal

Kuzma doesn’t seem too bothered with the trade talk rumors.

Via Silver Screen And Rool

“I don’t really worry about it. For me, I’ve been in trade rumors ever since I came here. I think that’s just a thing that happens when you’re a Laker. You’re always in trade rumors, especially around this time,” Kuzma said. “At the end of the day, you just control what you can control.”

The NBA trade deadline is still a month away so don’t expect the Lakers to bite on anything just yet.