Tickets For Today’s Rams-Cardinals Game In L.A. Are Selling For Less Than The Price Of One Stadium Beer 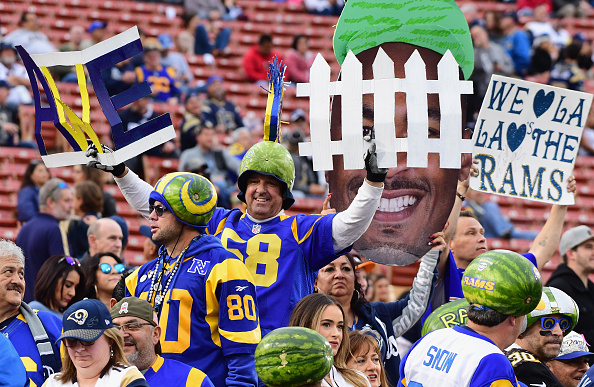 The Los Angeles Rams take on the Arizona Cardinals for their home-opener today in the Memorial Coliseum and fans in L.A. who want to go to the game and get in pretty damn cheap.

Hours before kickoff prices for cheap seats have dropped to $4-$6 for seats.

Cheapo NFL Ticket Of The Day: There are 90 seats, on @VividSeats, available in Los Angeles today for Rams-Cardinals game, for $5 or less. pic.twitter.com/fKJRiYq5Wb

I stalked Rams ticket prices religiously for the last few years in St. Louis, when owners were actively trying to move the (mediocre) team, and they were never single digits. Never. https://t.co/6lyg9IMi0L

$3 on Gametime app. You first Beer will be like 5x your ticket price.🤦‍♂️ pic.twitter.com/FmTPeRPNnT

Rams tickets for the low today 👀

Could someone please remind me again how St. Louis was such a horrible football town and deserved to lose it's team? Especially when everyone at LA pointed at the empty seats after more than a decade of losing?

I think the opponent matters in this case, im sure next week tickets will be more expensive, just cuz rams will blow put the cardinals

Unfortunately LA fans can probably expect to pay about $50 for parking near the stadium if they decide to go.