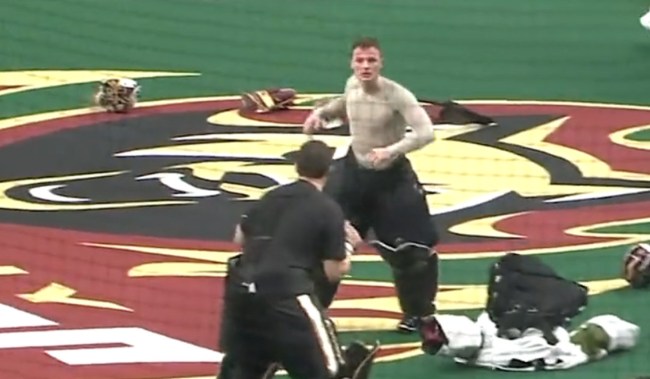 Fans at Saturday night’s National Lacrosse League (NLL) tilt between the Albany FireWolves and the Rochester Knighthawks got some extra bang for their bucks when the goalkeepers dropped their gloves for a one-on-one brawl.

During the game, the 1-1 Knighthawks jumped out early, then went on a four-goal run in the second quarter, and lead 8-3 at the half.

Early in the fourth, with Albany holding a commanding 13-4 lead, things began to go off the rails, reports Inside Lacrosse.

“That, predictably, led to flaring tempers and as several players from both sides engaged in some typical shoving and pushing,” wrote Inside Lacrosse’s Bob Chavez.

Was it predictable? Was it really? Because this was a heck of a fight… for lacrosse.

Hartley and Woods were throwing some bombs, especially Hartley who scored a TKO (on my scorecard) with some sharp jabs to the grill after Woods landed a pretty good uppercut.

By the time all was said and done there was lacrosse equipment scattered all over the playing field.

Once referees separated the two goalies, whose fight had degenerated into a two-man dog pile, both Woods and Hartley were given game misconducts and ejected from the festivities.

Get your pen and paper ready ✍️

Referee Andrew Ecclestone reads off the penalty minutes after the goalie fistacuffs. 😆 pic.twitter.com/E2hDdJOsci

3 hat tricks and an all around offensive explosion gave the @RocKnightHawks a statement win in Albany. pic.twitter.com/3jsa6dimnm

Rochester and Albany are now both off until their next games on Jan. 8. (Not against each other.)

Had the best view for it 😂 pic.twitter.com/P02VaakHve

Check out some of the best reactions to the lacrosse goalkeepers’ fight.

Bro with the black shirt after that one punch pic.twitter.com/k6i6cOzSN0

My guy was winding up hoping he could of land his 1 hitter quitter…. He’s still winding up to this day. pic.twitter.com/Dmp6wNKY77