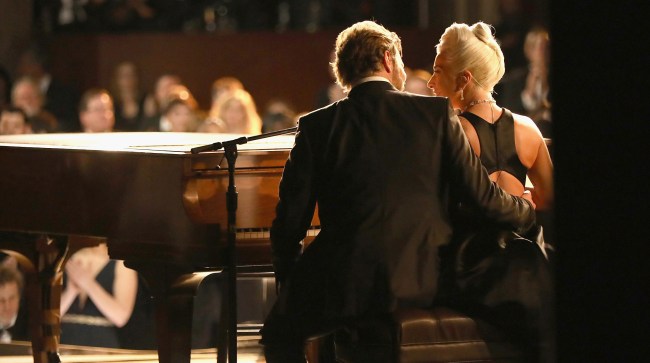 Am I the only one who felt EXTREMELY uncomfortable watching Lady Gaga and Bradley Cooper serenade each other and canoodle (yes, canoodle) during their steamy performance of “Shallow” during the Oscars Sunday night?

No, Mel B, I wasn’t? Okay, good. “See, I felt so uncomfortable for Bradley’s girlfriend, oh my gosh,” she told Piers Morgan on Good Morning Britain today.

“I would like to think it was part of the whole performance, because there’s a women’s code and hopefully that’s not… hopefully it’s only professional,” she continued.

Bradley Cooper's girlfriend putting on a brave face throughout all this Gaga/Bradley Cooper love fest. pic.twitter.com/yqH4cN1ovy

Body language expert Judi James studied the behavior of Gaga and Bradley with Express and she applauded their “acting” skills, “Like all great actors, they also stayed in the moment after the song rather than splitting apart and laughing to show it was all a nifty bit of panto.” [Note to self: look up the word panto.]

All that aside, something else unexpected occurred during Gaga and Cooper’s performance of “Shallow”… some seriously funny sports memes were spawned. Nope, I didn’t see that coming either.

Move over Distracted Boyfriend, there’s a new sherriff in town.

KD and the Knicks on July 1 pic.twitter.com/Yadz2rZzwI

Bradley Cooper's girlfriend is having a tougher week than Zion Williamson's shoes pic.twitter.com/Ia4PDFD0sZ

Me every time I see Josh Gordon in the queue. pic.twitter.com/3TCsk8vNEs

Bradley Cooper’s girlfriend catching up with Lady Gaga after the Oscars pic.twitter.com/M9jNXd3wI4

Me after watching lady gaga & Bradley Cooper singing 'shallow' on the #Oscars pic.twitter.com/QliA1O243c