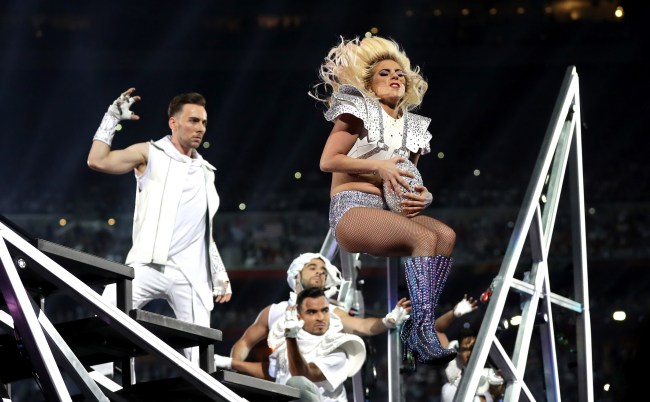 Apparently the people inside the stadium at Super Bowl LI saw a slightly different and less exciting halftime show from Lady Gaga than the rest of us did on television.

Turns out that Lady Gaga didn’t really jump from the roof of the stadium on Sunday. Her “260-foot leap” was actually pre-recorded. In reality, and anyone inside the stadium knew this, she was actually suspended about halfway up and then lowered on to the stage.

Still, pretty batshit crazy of her to do, but that’s not what we all thought we saw on TV.

Also, that very impressive light show that those 300 drones put on? Yeah, that didn’t happen live either. (Told you the people in the stadium didn’t get to see as good a show as we watching on TV did.)

Because of Super Bowl security measures and FAA regulations there was no way they were going to let 300 drones fly around over the top of 80,000 people.

So that too, I am sorry to say, was also pre-recorded.

Preparations kicked off in early December, when Intel’s engineers started wading into the mind-numbing logistics of choreographing 300 dancing drones. Do they fly inside the stadium? How are they integrated into what Lady Gaga is doing onstage? Is the stadium’s domed roof open or closed? “The whole halftime is a huge execution monster of an exercise,” says Anil Nanduri, who leads Intel’s drone efforts.

Once Intel and the Super Bowl creative team understood the restraints, they started storyboarding the show, settling on a sparkling array of stars that culminates in one giant, glittering, fluttering flag effect. Oh, and also the Pepsi logo, which was at least blue if not red and white.

Well, they had me fooled. And the technology, as you can see in the video below, is still pretty cool.

It just would have been cooler if she’d really jumped from the top of the stadium during the show.