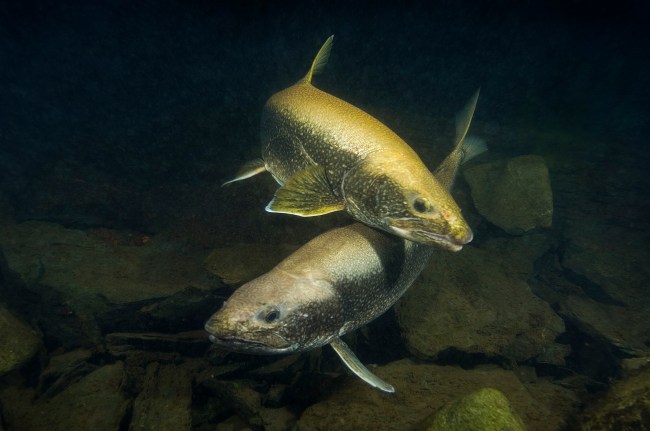 I’ve heard of two-headed lizards, snakes, and turtles before but I have never seen a fish with two mouths until now. An angler in upstate New York’s Lake Champlain reeled in a Lake Trout that many people are calling the ‘catch of a lifetime’ after she shared a photograph of this complete mutant.

Lake Trout is one of my favorite freshwater species. They aren’t as beautiful as their trout brethren like the Brook Trout or Brown Trout, but they are still stunning up close and they are absolutely delicious when prepared fresh and cooked with fresh lemon and the skin on.

Delicious or not, I’m not sure I’d ever eat this fish or any other mutant specimen for that matter. Angler Debbie Geddes was fishing with her husband on Lake Champlain when she reeled in this unique Lake Trout and her photo has since gone viral. She did let the fish go back into the water and it’s unclear what might have caused this fish to have TWO MOUTHS but there are some theories below.

Here’s that ‘once in a lifetime‘ fish:

The obvious question on everyone’s minds is why are we allowing the evil government to dump toxic ooze into this lake in order to make radioactive fish like Teenage Mutant Ninja Turtles. The second question is how could this realistically happen and people are split on that.

According to MYNBC5, theories range from a swallowed hook causing a deformity in the fish at a young age to this fish being the spawn of Champy, Lake Champlain’s famous lake monster.

Adam Facteau is the guy who uploaded this photograph to Facebook and he spoke with Fox News about the catch:

“I just can’t believe all the attention this has received,” Geddes said. “The public’s responses/theories are quite interesting, to say the least. I personally believe it was caused by a previous injury, most likely from another angler.”

Not surprisingly, Geddes wasn’t the only person speculating about the cause. Many commenters blamed pollution, while others agreed with Geddes’ injury theory.
“Well, I think everyone has an opinion, which makes it interesting for discussion,” Facteau says of the theories. He’s not convinced that it’s an injury, however.

“Sure, that’s possible. Maybe,” he said. “However, Lake Champlain is also known for being a sewage dumping ground from Canada and (Vermont). Plus, many of these fish are stocked.”
“Could it be? Not sure,” he continued. “Regardless, it’s a catch of a lifetime and has a lot of public opinions.” (via)

I won’t even begin to speculate on what could’ve caused this Lake Trout to have two mouths. I’m more impressed that this fish made it to adulthood with that deformity when it’s probably a massive pain in the ass to swallow food with all of that extra water flow in there disrupting its natural style of predation.

If you want to dive into the Facebook comments and see what other people are saying about this fish and the potential causes of this deformity you can find the original post here.