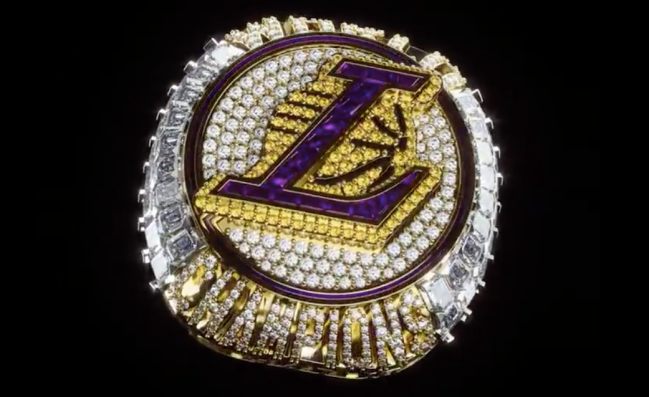 In 1922, the *Chris Berman Voice* New York Baseball Giants topped the Yankees in the World Series and the organization commemorated the victory by giving its players what are believed to be the first championship rings in the history of sports.

The 1922 Giants were the first team to receive World Series championship rings. pic.twitter.com/0vVwVetlnG

Prior to that point, teams had a tendency to choose function over flexing by doling out more practical items like watches and cufflinks to celebrate the win, but rings eventually became the go-to option and it’s safe to say they’ve come a long way since the Giants embedded a single diamond into some gold and called it a day.

While the NBA managed to salvage $1.5 billion of the revenue it would’ve forfeited if it hadn’t constructed a bubble to finish the season, the organization still missed out on the same amount courtesy of the pandemic. Of course, teams weren’t immune to the situation and none of them were hit harder than the Lakers, who won a championship but lost at least $52.7 million in potential ticket sales, the most of any team in the league.

However, it would appear the franchise isn’t hurting too much based on the rings it commissioned after taking home the title, as it spared no expense when it came to the blinged-out behemoth that was unveiled on Tuesday.

According to TMZ, the rings were designed by Beverly Hills-based jeweler Jason Arasheben and feature 804 gemstones (with white and yellow diamonds making up the bulk of them) that add up to a hefty 16.45 carats (it’s unclear how much they’re worth, but Arasheben claims they’re the most expensive piece of celebratory hardware in NBA history).

Over the years, it’s become customary to incorporate various homages to the winning season into the ring’s design and these are no exception, as the logo consists of 17 purple amethysts that reference the same number of championships the Lakers have now won in addition to nods to LeBron James’ “Leave A Legacy” mantra and the Orlando bubble.

However, the highlight is easily the multiple tributes to Kobe Bryant that grace the ring, as scales inspired by the “Black Mamba” moniker can be found on the band that features the numbers of every player who contributed to the team’s achievement in addition to the lineup of retired jerseys hidden underneath the removable top.

So many details on these Lakers rings 🏆

As if that wasn’t enough, the Lakers also spared no expense when it came to the boxes the rings were presented in, because if you’re going to go as big as they did, you don’t want to half-ass the presentation.