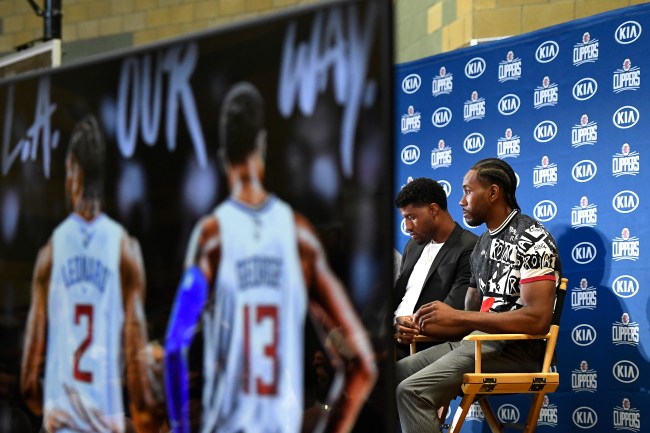 The Clippers introduced their two newest acquisitions this afternoon during a press conference that had team owner Steve Ballmer all fired up.

Clippers owner Steve Ballmer is FIRED UP to have Kawhi & PG 😂 (via @NBATV) pic.twitter.com/7kwZ8ewo5I

After the presser, the Clippers unveiled a new mural dedicated to their two new stars.

The #LAClippers unveil a mural for Kawhi Leonard and Paul George pic.twitter.com/g7x9GbtQQg

Paul George and Kawhi Leonard get their own mural in LA. #Clippers pic.twitter.com/Beg7ZRM5hO

During the unveiling one Lakers was heard heckling Kawhi and PG about LA being a “Lakers town”.

There’s a Lakers fan heckling Kawhi Leonard and Paul George about this being a Lakers town.

There was a Lakers fan that showed up and started heckling, called the Clippers mural graffiti. “This is a Lakers’ zip code.” Said Clips we’re gonna end up in Seattle. Honestly, not bad trash talk to kick things off.

#Lakers fan speaks his mind during #Clippers mural unveiling for Paul George/Kawhi Leonard after the presser: “This is a Lakers good!” pic.twitter.com/NRUGxubOrg

The Clippers-Lakers rivalry is going to be a fun one to follow next season.