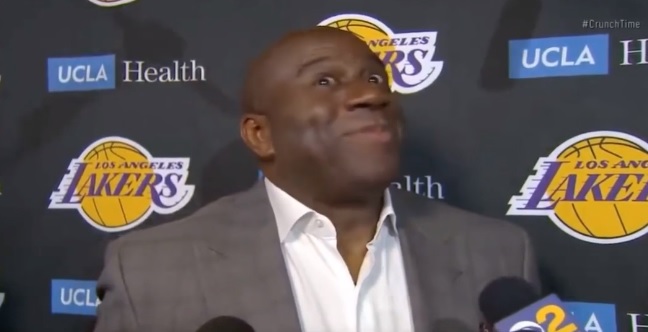 Back in 2019, Magic Johnson left his position within the Lakers organization during an infamous press conference late in the season that has spawned thousands of memes.

Johnson went on to accuse Lakers GM Rob Pelinka of backstabbing him during an appearance on ESPN’s First Take.

Magic Johnson identifies Rob Pelinka is the person who was backstabbing him. pic.twitter.com/3mul9lJuzi

Despite all that drama, Johnson was gifted a 2020 championship ring by Lakers owner Jeannie Buss this week.

Cookie and I are so blessed to receive our championship rings! Thank you to Laker owner @JeanieBuss, the Laker players and especially @KingJames because he told me he was going to bring a championship to Laker Nation. This is my 11th NBA Championship ring! pic.twitter.com/R5n7foBPuR

Fans weren’t happy Magic received a ring after quitting on the team in 2019.

Wait why'd he get a ring when he quit and was the reason the Lakers became a laughing stock??

Not only that but he quit publicly while not telling Jeanie then tried to sabotage Rob by labeling him as a snake. He literally tried to burn down the franchise while running out the door.

Lol, he literally pooped on this franchise on local television on his way out. https://t.co/0cv6PE7F1J

Being rewarded for quitting your job and bashing Rob Pelinka after making some of the worst decisions as a GM is insane. https://t.co/NZ16OtPuEv

Wait. Didn’t he quit? Someone fill me in, I’m confused lol https://t.co/9KLInyq5Ib

How is Magic gonna quit on the Lakers then still get a ring? https://t.co/7nFDdefQMY

Bruh why does he get a ring he left the team last year in disgrace https://t.co/bT5t4JJIgg