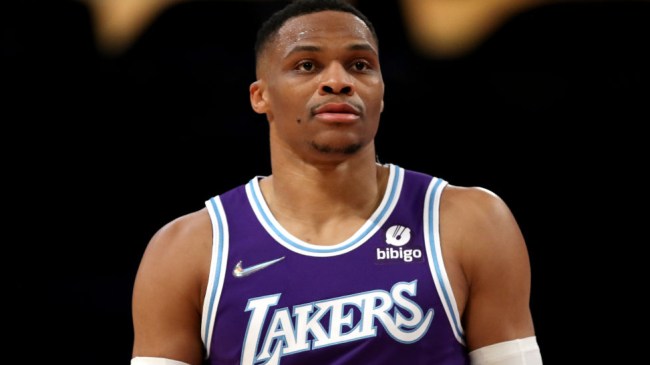 The Los Angeles Lakers have lived far from preseason expectation this year, limping out to a 27-33 record through 60 games. With less than 25 contests remaining on the regular season slate, their playoff hopes are in serious doubt.

Coming into the year, the so-called “Big Three,” comprised of LeBron James, Anthony Davis, and Russell Westbrook was supposed to lead the organization to a postseason run. The Lakers may not have been expected to challenge the Warriors and Suns in the Western Conference, but they did not predict to see themselves six games below .500 this late in the campaign.

That Big Three has largely failed to live up to the hype.

James has been his typical self, posting 29 points and eight boards a game. Unfortunately, his supporting cast has struggled. Davis has been injured as much as he has been on the floor. Westbrook, though healthy, has been downright bad at times, becoming the butt of jokes across the NBA.

The poor play has led even video game companies to change their opinion of the triple-double king. Things have gotten so bad that teammates, including James, were reportedly angry about the decision not to dish Westbrook at the trade deadline.

Those feelings of animosity may have grown a bit more over the weekend as the LA guard saw another subpar performance in Sunday’s 28-point loss to the Pelicans.

That’s a far cry from the output you’d expect from someone being paid more the $40 million a year.

With another bad night on the floor, Lakers fans took to social media to voice their displeasure for the former NBA MVP.

Man wtf is up with Russell Westbrook bruh 😭😭😭😭😭 pic.twitter.com/YTk3VpwMih

Got smoked by 30 points and Westbrook is all smiles and waving goodbye pic.twitter.com/dcmNQxTO4R

How Westbrook be after Turnovers 😂😩 pic.twitter.com/SNPt0eQbfB

It appeared that owner Jeanie Buss had even had enough watching Westbrook’s poor play on the court, as she got up to leave midway through the third quarter.

Westbrook clapped back at the criticism by saying that he won’t take anything home with him after the game. Instead, he thinks the Lakers just need to work harder as a team, failing to take responsibility for his lackluster play. These quotes make it seem as if the point guard doesn’t care about what’s transpired on the court.

"I got three beautiful kids at my house, my wife, I ain't taking that home."

Russell Westbrook on the Lakers' effort: "Teams are coming in and playing harder. I believe that's their scouting report: Just play harder than them and see what happens."

Russ said this will continue to happen to the Lakers until they start consistently playing harder.

Hopefully he can take some of the displeasure to heart, using it as a form of motivation to finish out the season strong and push the Lakers into the playoffs. Until then, this expensive deal will remain one of the worst in recent memory and fans will continue to let him know.