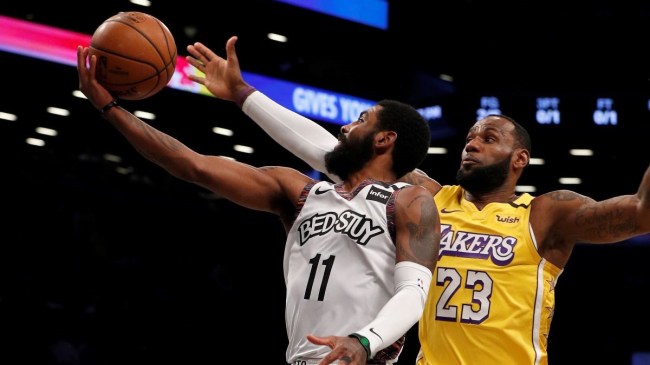 Perhaps no sports league’s news cycle moves quite as fast as the one in the NBA. Just this summer, the Los Angeles Lakers trading for Brookyln Nets star point guard Kyrie Irving seemed inevitable.

In the months since that report, things have fallen apart for both sides. The Lakers have one of the worst records in the entire NBA at 2-7. The Nets aren’t much better at 4-6, and Irving has been suspended for endorsing an anti-semitic film and refusing to apologize for doing so.

But this is professional sports. And if there’s one thing we know about the big-money business of professional sports, it’s that winning is put above all else. The Lakers are not doing very much winning and it’s likely to get someone, or multiple someones, fired.

While Irving presents a unique set of, erm, headaches, he’s also a very skilled basketball player. So it’s possible, even if unlikely, that he could turn the Lakers from big ol’ losers to entertaining winners. Which is why his name has still been linked to a move out west.

Though a new report from Sam Amick of The Athletic makes it seem like that move is extremely unlikely.

Amick spoke to a number of front-office executives across the league. Each one seemed to feel that Irving does have some future in the league. Though Amick makes it clear that he doesn’t feel that his future with be with Los Angeles

“Yet as we reported in early October and a sentiment that still exists, sources say the Lakers have significant concerns about the prospect of adding Irving at any price and have not been focused on that scenario all season long.

It’s quite clear that Laker Land is a highly unlikely, if not impossible, landing spot.” – via The Athletic

For all his talent, Irving’s baggage is starting to be too much for a number of NBA teams. The seven-time all-star missed 128 games since arriving in Brooklyn. That’s 17 more games than he’s played in.

Will fans still accept Irving’s bigotry and nonsense if he’s not winning championships? That’s the question that league execs will have to answer.