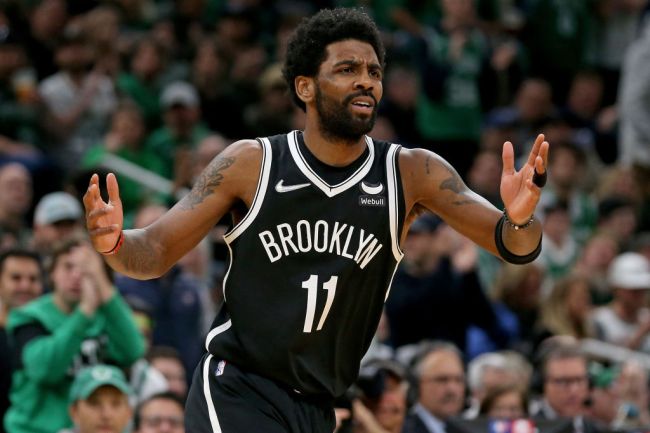 We are a week away from the deadline for Kyrie Irving to sign his player option for next season with the Brooklyn Nets.

It had been reported in the past that Kyrie and the Nets weren’t in agreement about Kyrie’s future as the team wasn’t interested in offering him a long-term extension.

While it remains unclear whether or not Kyrie will return to the Nets, Adrian Wojnarowski reported today that there is already a favorite to land him if he becomes available. According to his report, the “most significant threat” to bring in Kyrie.

The Los Angeles Lakers are considered the "most significant threat" for Kyrie Irving, per Woj on NBA Today#NBATwitter #LakeShow pic.twitter.com/aMM7BjwPig

There are a couple of things standing in the way of a reunion for Kyrie and LeBron. First, Wojnarowski also said in the report that the belief right now is that Kyrie would pick up his player option.

Russell Westbrook is also currently a major obstacle that would get in the way of the Lakers signing Kyrie. The team is struggling to trade Westbrook and he has a player option of his own that he is expected to pick up. That player option will cost the Lakers $47 million.

Before the Lakers could ever go after Kyrie, they would have to find a trade partner for Westbrook.

If the Lakers can go ahead and actually make that happen then a reunion between LeBron and Kyrie would be a very interesting possibility for them as they try to bounce back from missing the playoffs this season.