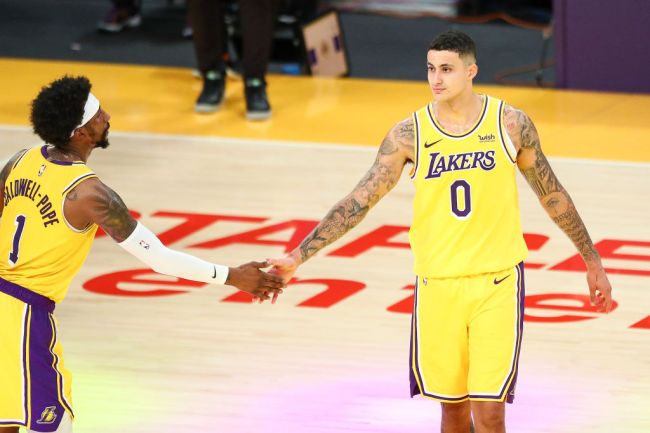 The LA Lakers are desperate to get a third star alongside LeBron James and Anthony Davis but teams around the league apparently don’t want the players they have to offer in a trade.

During ESPN’s draft special, ESPN’s Adrian Wojnarowski revealed that the Lakers offered Kyle Kuzma and Kentavious Caldwell-Pope to almost every team he’s spoken to but have to make a trade.

“They have literally offered Kyle Kuzma and KCP to almost every team I’ve talked to in the league, has been offered some combination of Kuz and KCP…and that’s not going to get them back a point guard of Dennis (Schroeder) stature”

Adrian Wojnarowski says the Lakers have offered KCP and Kuzma to "almost every team" in the league pic.twitter.com/e38eTZeTgB

According to The Athletic’s Shams Charania the Lakers may be settling on trading for Kings’ Buddy Hield for Kyle Kuzma.

The Lakers and Kings have discussed a trade centered around Buddy Hield, per @ShamsCharania

Kyle Kuzma would likely be involved in any potential package. pic.twitter.com/r5PEFDVqia

At the end of the day it doesn’t appear like the Lakers have enough assets to get a third star to compliment AD and LeBron.