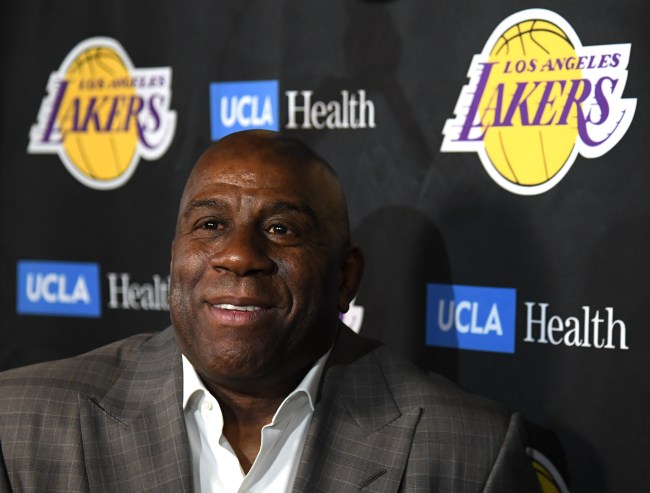 The LA Lakers are currently interviewing several candidates for their head coaching VACANCY despite the fact that the team does not currently have a President of Basketball Operations following the abrupt departure of Magic Johnson.

For the past week or so there have been reports swirling that the Lakers were not really interested in making a high-profile hire to replace Magic Johnson as the team looks for a new head coach.

Via Marc Stein of the New York Times

In numerous rival organizations, there is both shock and relief that the Lakers haven’t responded to events of the past week by chasing the likes of Golden State’s Bob Myers, San Antonio’s R.C. Buford and Oklahoma City’s Sam Presti before they go looking for a new coach.

Fox Sports’ Colin Cowherd is reporting that he’s being told that the Lakers do indeed already have a replacement for Magic Johnson and that person is currently working for a playoff team.

– Monty Williams is No. 1 choice, but might not get him if 76ers lose in 1st 2 round of playoffs
– Ty Lue 2nd choice and likely HC
– Already have someone to replace Magic, he's currently running another team in playoffs pic.twitter.com/AuikjEa16F

“They are communicating with him and he is OKing all these moves,” Cowherd said of Johnson’s mystery replacement. “He is not currently in the Laker building. He’s currently running another team that’s in the playoffs. It could be a handful of people. It could be a Michael Winger with the Los Angeles Clippers, Bob Myers with Golden State, young smart guy in Toronto. There’s a couple other guys out there.”

It is strange that the Lakers have not yet interviewed anyone for one of their top executive positions considering how important this offseason is for them.