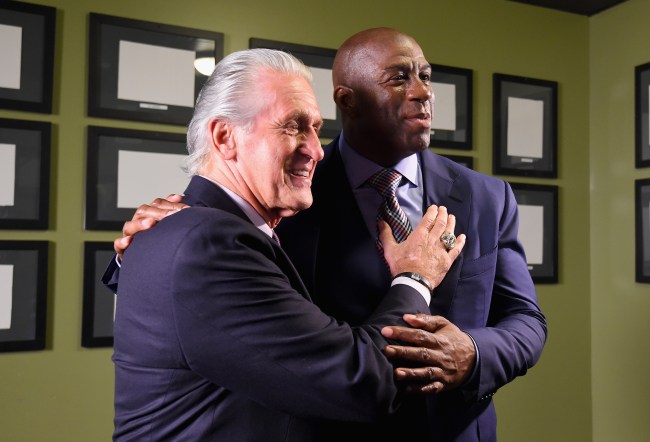 The LA Lakers are currently on the hunt for a President of Basketball Operations after Magic Johnson abruptly quit on the team a few weeks ago.

According to The Athletic’s Sam Amick the Lakers are aiming high and are looking to hire a big name this offseason to replace Magic.

🔊 The Lakers are reportedly looking for a replacement for Magic Johnson and could be aiming high for their next president. (via @sam_amick with @SedanoESPN, @KamBrothers & @iamBenLyons)

“I found it really interesting when I was told that the Lakers never reached out to Dave Griffin, because in NBA circles, he’s as good a name as you’re going to find right now. And then when I kept learning more about some of their potential approaches here, I think what is clear is that they are shooting even farther than David Griffin, even higher than that.

On this morning’s edition of First Take, Stephen A Smith dropped a bomb when he revealed that Lakers owner Jeanie Buss was interested in hiring in Pat Riley to take over the team.

Jeanie Buss is hellbent on making a big splash and the name that I’m hearing is Pat Riley.

It is worth noting that Pat Riley is currently working for the Miami Heat and has said that he intends to finish his career in Miami.

FWIW: Riley told media at his season ending presser… while, he has a lot of admiration for his former club, he wasn’t interested in leaving Heat to return to Lakers. https://t.co/wNe8j7lYYt

▪ In the wake of Magic Johnson’s resignation, Riley ruled out going back to the Lakers’ front office and said he “absolutely” will finish his career in Miami.

“I’m not going to comment on another team’s misfortune while they’re going through some adversity right now,” Riley said. “I was there for 20 years and I have a lot of friends still in the organization. I had a good conversation with Magic after he stepped down and I’m sure they’ll work it out. I’m not going to be part of that. That’s not what I want to do.”

I’m pretty skeptical that anyone would be interested in taking the Lakers job while Rob Pelinka is still making decisions for the team.