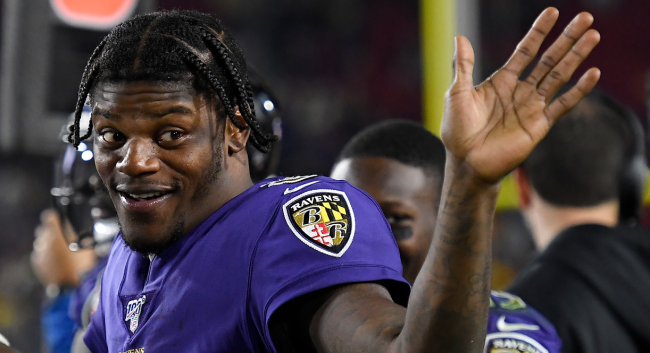 “I’ve heard Lamar Jackson say he wants to win Super Bowls, he wants to win a bunch of Super Bowls,” Simms said to Mike Florio. “I think there was a time where he was like, I want to be like Brady. I remember him saying that earlier in his career. Well, Brady wouldn’t be missing OTAs in year four of his career. That’s what I want to say to some of these young quarterbacks.

“I hear, I want to be like Brady, I want to have a career like Brady,” Simms continued. “Well then do what Brady does! Brady didn’t miss an OTA until he had played in four Super Bowls and, you know, started to get married and then started to miss a few OTAs.

“But then things didn’t go that great in 2010 and 11 and 12. And you know what he started doing? I’m going to be back at OTAs. I’m going to get a little bit better. We need this. That’s where, just from the football standpoint, I just don’t get it. I don’t at all.”

.@CSimmsQB on Lamar Jackson, who once said he wants to be the Tom Brady of his era:

"Brady wouldn't be missing OTAs in year four of his career. … Brady didn't miss an OTA until he had played in four Super Bowls…"

For what it’s worth, Ravens team president Sashi Brown told WBAL Radio, “Voluntary does mean voluntary. Lamar’s been out working this offseason … so no, I don’t think any reason for alarm.”

Jackson also tweeted this a few days ago.

Lamar Jackson is not here for criticisms from Chris Simms

Friday morning, Lamar Jackson responded on Twitter to Chris Simms’ take on him not attending the Ravens OTAs this year.

“Lamar wants to be Lamar Chris [sic],” Jackson tweeted. “This part of OTAs is Voluntary my Guy I will be there, just not on your watch it’s probably other QBs not attending Voluntary OTAs either but since it’s Lamar it’s a huge deal. Find something else to talk about.”

Lamar wants to be Lamar Chris. This part of OTAs is Voluntary my Guy I will be there, just not on your watch it’s probably other QBs not attending Voluntary OTAs either but since it’s Lamar it’s a huge deal. Find something else to talk about🙄 https://t.co/2Nx2b767bb

NFL fans were pretty entertained by Jackson taking Simms to the woodshed on Twitter.

Lamar is saying Chris Simms needs to mind his own business, Lamar isn’t holding out he is putting in his own work during the off-season. He isn’t worried about being any other type of great other than Lamar Great.

Lamar, take it from Chris Simms, his Dad was a good quarterback 45 years ago. Also, Chris had an amazing NFL career, he threw for over 10 touchdowns and under 20 interceptions. Maybe listen before you decide how you’re training.

Browns fan here. It's always funny when I see failed NFL players tell All-Pros what they should do.

But, as always, not everyone was happy.

Dude talking in the 3rd person, not engaging in contract talks and not going to OTAs... not good signs

Josh Allen is at OTA's. Some QB's just want it more. Why get defensive over what Chris is saying? I hear some truth in there no matter who it applies to.

— Josh Allen Will Bring The Lombardi To Buffalo (@JAllenBadAssQB) May 27, 2022

Others, well, they were just here for the jokes.

Whew, for a second there I thought L-Jax was changing his name to Lamar Chris....