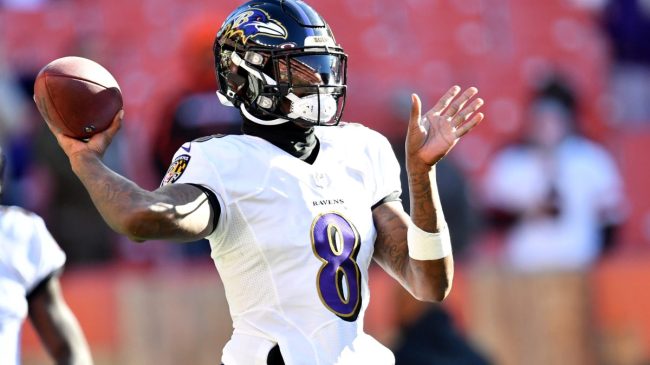 Lamar Jackson is back in Baltimore. That’s music to the ears of Ravens fans across the NFL as Jackson’s absence from offseason workouts had grown a bit worrisome.

The fifth-year passer has been attempting to negotiate a contract extension with the team this summer as he enters the final year of his rookie deal. It was never truly believed that he was unhappy in Baltimore, but getting some long-term security is something the quarterback is looking for.

Jackson was a no show for voluntary OTAs, but fans can finally take a sigh of relief as he’s announced his excitement for the upcoming year.

The Ravens posted on social media a video of Jackson decked out in his Baltimore gear.

“I hope you’re ready for the season, I know I am.”

The words signal Jackson’s focus on 2022 amid his contract negotiations. Not only does it have fans excited, but a few of his Ravens’ teammates were quick to post about his being in the building, too.

A couple of Ravens players reacted to Lamar Jackson’s return to the team. Both Marlon Humphrey and Rashod Bateman posted their responses to having their quarterback back.

yo I seen Lamar Jackson today , he good🤣

Bateman should be particularly glad to have Jackson back. The second-year receiver had a solid first season with the Ravens, hauling in 46 passes for 515 yards.

He’ll see an even larger role in 2022 with Marquise Brown’s departure to Arizona.

Jackson is hoping to lead Baltimore back to the NFL playoffs next season after the team’s 8-9 finish a year ago. This is the first step in achieving that goal.