Lamar Jackson Reveals How He Trolled Fans Amid Contract Situation 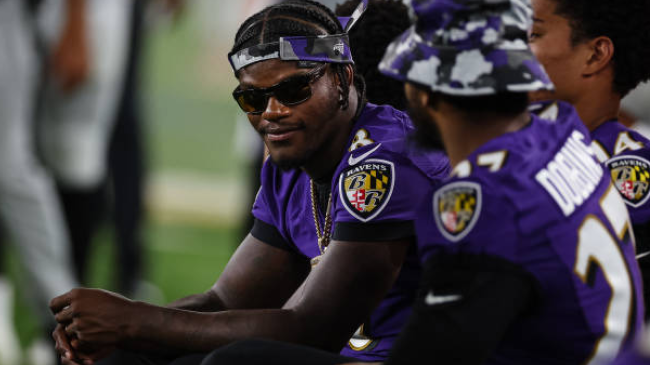 Lamar Jackson has spent this offseason at the center of a very odd contract negotiation.

Jackson is heading into the 2022 season on the last year of his rookie contract. Early on in the offseason, the Baltimore Ravens were interested in changing that, but were getting ghosted by Jackson.

As the offseason progressed, Jackson entered the negotiations, but we are just a day away from the deadline he set for negotiations and he still doesn’t have a new deal.

The way that the contract negotiations have progressed has led to plenty of speculation from football fans and now it seems that Jackson was fueling some of that speculation for his own entertainment.

During an appearance on the GoJo Show podcast, Jackson revealed that he like a tweet of himself in a Dolphins jersey to troll fans that thought he wanted to leave the Ravens.

On the @GoJoShow, Lamar Jackson basically says he liked a tweet of himself in a Dolphins jersey as a joke for everyone who thinks he wants out of Baltimore. pic.twitter.com/kdc6F54CYX

This is some pretty incredible trolling from Jackson and really might not have been the worst tactic to speed up contract negotiations. There are certainly worse ways to get that full-guaranteed contract you’ve been looking for than letting the Ravens think that you want to go replace Tua in Miami.

Considering how much scrutiny Jackson regularly finds himself as the target of in the media and from fans, it’s nice to see him having a bit of fun with a tough situation.

Luckily for Ravens fans, they likely don’t actually have any reason to worry about Jackson looking for a warmer destination.