Twitter Is Convinced That This Old Pic Of Samuel L. Jackson Is Actually Lamar Jackson In Disguise 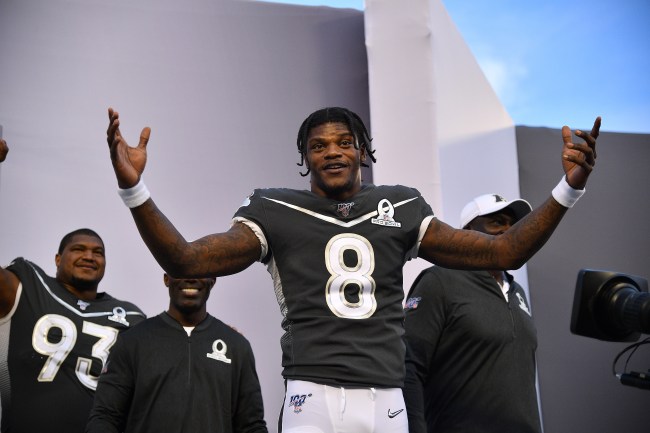 It’s been a big day for Lamar Jackson so far. Not only did the reigning NFL MVP show-off his new look as the cover boy for the video game Madden NFL ’21 — with a pretty badass teaser to boot — but he also got compared to Hollywood royalty thanks to a picture that surfaced of one Samuel L. Jackson on Twitter.

Thanks to a fun fact from the account Everything Georgia — which mentioned that the 71-year-old actor was an usher at the great Martin Luther King’s funeral in 1968 (when Samuel L. was just 19 years old) — the image chosen to show the actor was one that really took people by surprise. Below is the original post from the Everything Georgia account.

FUN FACT: After Martin Luther King was killed in 1968, his funeral was held at Morehouse College in Atlanta, Georgia, and a small group of current students were chosen to be ushers for his funeral. One of those ushers was Samuel L. Jackson. pic.twitter.com/oWTYpRwz5u

If you looked a little harder at the pic of Samuel L. and thought, “oh, man, who does that look like…?” you’re not alone, as plenty of people were quick to point out the striking similarity the image has to Lamar Jackson. In fact, Jackson’s teammate on the Baltimore Ravens, Marlon Humphrey, even reacted with surprise, revealing how he thought it was the Pro Bowl quarterback.

No cap I thought this was Lamar https://t.co/RfL6Iqfr6K

Plenty of people followed suit, sharing the same reaction that Humphrey did — including Lamar himself, who joked about the image being of “Uncle Samuel Jackson.” See below for some of the other reactions from the good people of Twitter.

Atleast you know what you gon look like when you older

What you think the L stand for?

Look, there are a lot of celebrities who have a few look alike’s running around out there, but there might not be anyone more identical than a young Samuel L. Jackson and the current Lamar Jackson. No joke, if you touched up some of those old Samuel L. pics and put him in a Ravens jersey, half of the Internet would 1000% believe it was just the dynamic quarterback.

Can somebody, anybody, please get these two together when all this quarantine BS is over and have them take a couple pics together? That seems to be the kind of fun we all need right about now.