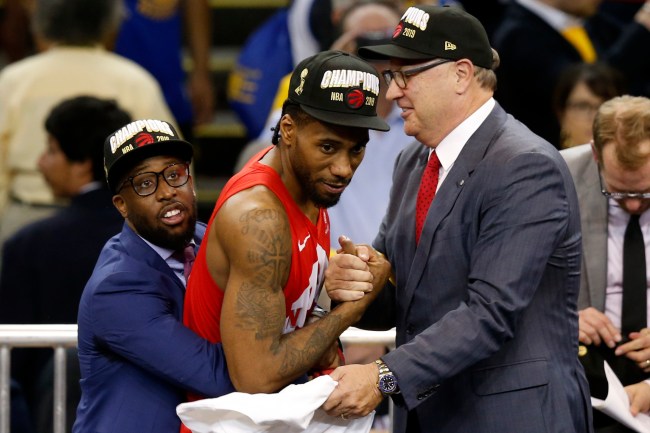 Kawhi Leonard and his Toronto Raptors’ teammates are celebrating with an entire nation today, as the team took to the streets to party their asses off after winning their first ever NBA Championship last week. And while the entire country of Canada has, seemingly, been drinking Molson Canadian and taking shots of Crown Royal the past few days — at least in my mind — there’s a big elephant in the room when it comes to what might come next, as Leonard is set to become a free agent.

But those thoughts can be put on pause for now, because everyone who’s in attendance at the Raptors’ championship parade seems to be having a good time — and one Kawhi Leonard look-alike might be the person really stealing show.

As popular as the reigning NBA Finals MVP might be in the city, this dude didn’t just show up impersonating the real Kawhi, but he was in full character and full uniform, causing quite the scene from Raptors fans who just couldn’t get enough of him. Just look at all the people swarming fake Kawhi for pictures and autographs.

A fake #KawhiLeonard is taking selfies and signing autographs for #Raptors fans before the parade in #Toronto today #WeTheNorth #WeTheNorthDay pic.twitter.com/rJndwhAsPN

A fake #KawhiLeonard has been spotted taking selfies with #Raptors fans in #Toronto this morning before the parade #WeTheNorth #WeTheNorthDay pic.twitter.com/VuIHsit3bk

That’s gold, man. Hopefully none of these people are actually being duped into thinking it’s the real Kawhi Leonard — then again, some people are really dumb and will believe anything — and there are a lot of people in the pics and videos above who actually look like they think this dude’s really Kawhi. But, hey, part of pulling a master prank is making people believe it, and fake Kawhi seems to have done that job really well here.

With the real Kawhi Leonard becoming a free agent in a few weeks, it’ll be interesting to see if the love for him will fade if he ends up bolting Toronto or not. I mean, the dude did just deliver a title in his first (and only?) season with the Raptors, so nobody should be pissed if he ends up leaving — but the fake Kawhi might need to find a new player to impersonate.