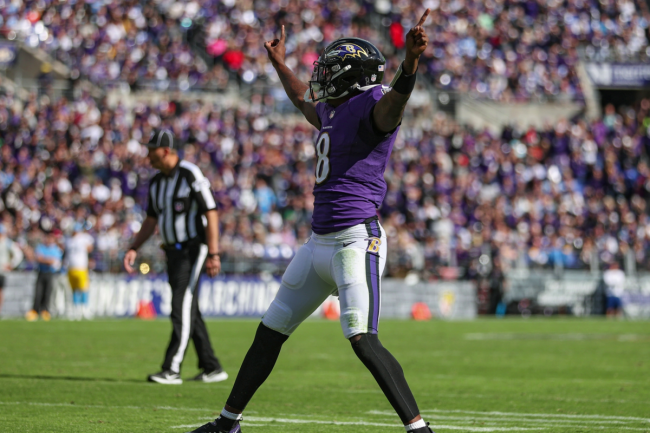 Lamar Jackson might’ve just let fans in on his first touchdown celebration of 2022. And it should have Ravens fans rolling in laughter when he crosses the pylons for that initial score.

Jackson, an MVP winner in 2019, has found pay dirt 21 times as a rusher over his four-year career. He’s added another 84 scores through the air, giving him much reason for celebration. He looks primed for a breakout year in 2022.

The signal caller has given fans a number of different touchdown dances over the last four seasons. He’s done front flips, the “squirrel dance,” and popular moves from music culture, byt he may have found his best yet.

On Sunday, Jackson posted a message on social media hinting at what his next celebration could be. It involves former Steelers wide receiver Antonio Brown.

Jackson retweeted a video of former footballer turned rapper Antonio Brown performing at a recent show at the Rolling Loud music fest. Along with the post was a caption that said, “I can’t wait to do this.”

We’re assuming that Jackson means he can’t wait to do this dance move that’s been making its way around social media. That’s a move that many have clowned since Brown first introduced it in this performance.

If Jackson pulls out AB’s move after housing his first score, Ravens fans are going to lose it.