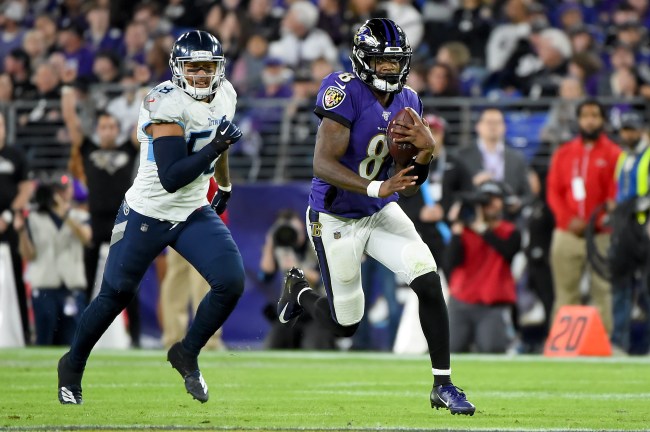 EA’s Madden is one of the most popular gaming franchises on the planet and for good reason. It gives fans a chance to experience the NFL in a way that they’d never be able to at home. But it stops short of really immersing fans into what it would be like to play as an NFL player and that’s a void that virtual reality developer Status Pro is seeking to fill with their new game.

Status Pro is developing The Lamar Jackson Experience which will allow fans to play the game as Lamar Jackson on the field, recreating real highlight plays from his 2019 NFL season and it’s all based on actual player data.

According to Mashable, the announcement is ‘ light on specific gameplay details’ but there’s plenty in this announcement to pique my interest. Most importantly, knowing that there will be an array of difficult settings so I can play on ‘easy’ and not get demolished by opposing defenses allows me to get interested in this game without having to start training today to get in peak physical condition.

The teaser doesn’t offer up a ton of information but it’s pretty cool nonetheless. But Mashable‘s interview with Lamar Jackson (below) sheds some light on just how cool this game could end up being:

Here are some highlights from Lamar Jackson’s interview on what fans can expect from this game:

“You’ll be able to see things a lot clearer because it’s right all in front of you,” Jackson said. “You’re in the game. You’re feeling it. You’re embracing it.”

Jackson’s made plenty of memorable plays on his way to winning a league MVP award in 2019. One play, in particular, he’s excited for players to experience is his first touchdown pass to Marquise “Hollywood” Brown — a 47-yarder that Jackson fit into tight coverage to break open their game against the Miami Dolphins in the first quarter.

“That’s a dope one,” Jackson said.

While Jackson is looking forward to players being able to do what he did on Sundays, he noted that it might put their skills to the test.

“The game’s hard,” Jackson said. “You’ve gotta actually follow through… [and] throw a perfect pass. I love it.” (via Mashable)

The game is currently untitled and is expected to make its debut later this year, most likely at some point during the Fall of 2020. It will initially roll out for Oculus headsets and later on other VR platforms.

This entire video game was actually borne out of Lamar Jackson’s experience on training using virtual reality from companies like STRIVR. So there is a precedent to the authenticity of this VR experience of seasoned NFL players have been using similar experiences to train for NFL gameplay. It will be interesting to see more details on this project as they are announced in the coming months and which other players out there eventually get their own VR experience.

For now, you can click here to visit Mashable and read more about this forthcoming VR ‘Lamar Jackson Experience’ video game.