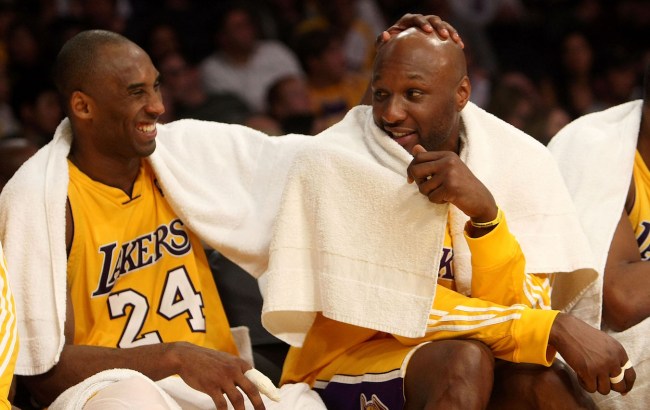 As tributes to the late Kobe Bryant continue to pour out from all across the globe, perhaps one of the most poignant and heartbreaking messages comes from Bryant’s friend and former Lakers teammate Lamar Odom.

Taking to Instagram to pay tribute to his fallen teammate and “brother”, Odom expressed that if God would have come to him while he was in a coma and said he would take him instead of Kobe, he would have done it.

Odom’s words represent just one of countless tributes that have poured out in the last 24 hours following the news of Bryant’s tragic and untimely death. Bryant, just 41-years-old, passed away in a helicopter crash in Calabasas on Sunday, January 26. In addition to Kobe, Bryant’s 13-year-old daughter Gianna Marie and seven other people were killed.

“These picture are just the tip of the iceberg of our relationship. He taught me so many things in life that were necessary on and off the court. On the court he taught me how to carve out defenses and how to take my time. How to make winning my ultimate goal. Off the court he taught me to sign my own checks lol. Of course anyone who knows my story knows I’ve suffered a lot of loss but the only loss I can compare this to is when I lost my son. Even though our relationship wasn’t father/son, it was more like him being a teacher and me being his brother. I’m glad I got to be the ying to your yang as far as the locker room was concerned. It was my pleasure,” Odom wrote on IG.

“I couldn’t even catch my breath today when I heard this news. I just knew if he was in a helicopter crash he would have been the one to survive. Somehow he would have jumped out and landed on his feet. I’m sitting here thinking about when we would be in practice scrimmaging and you would start the jump ball off with elbowing Sasha in the chest. Like dude it’s 10:30 in the morning lol. You think watching him play was crazy, you gotta think in practice if you scored like 8-9 buckets throughout the practice you had a great practice. I’ve seen him knock off 13-14 in a row in practice!!!! I’m still waiting for the media to come out and say wrong report. No way God took my brother this early. I know I been through my own stuff in life with using drugs and not being good to myself. When I went through that Coma situation if God would have came to me and said we would take me and spare Kobe I would have rather that happened. In honor of my brother I’m up at 4am tomorrow to get to the gym! Gigi gone give you buckets!!!! I love you brother.” [via Instagram]

Odom, who played with Kobe Bryant on the Los Angeles Lakers from 2004 to 2011, was apart of the 2009 and 2010 NBA Championship-winning teams that were led by the Black Mamba.