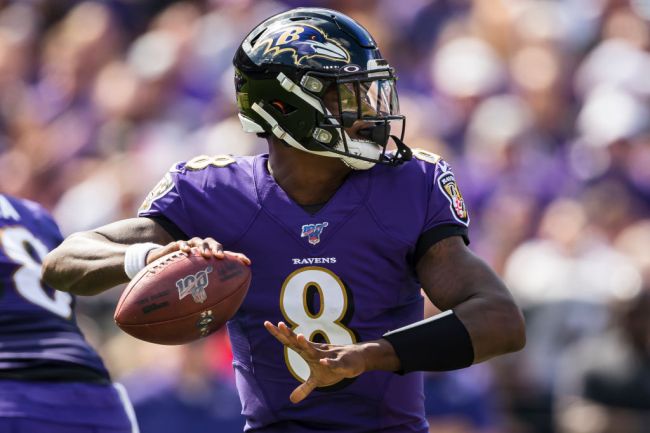 Lamar Jackson and the Ravens aren’t having a bad season by any means as Baltimore is 6-2 on the year with the quarterback having 15 total touchdowns on the year, but the offense hasn’t been as electric as what we saw from it a year ago.

Baltimore’s offense ranks 23rd in the league in yards per game, a category in which it finished second in the league a season ago. To add to their frustrations, the Steelers are still unbeaten and have a two-game lead on Baltimore in the AFC North standings.

Jackson made a surprising comment as to why the offense has slowed down this season, telling Rich Eisen on Wednesday that defenses “are calling out our plays, stuff like that. They know what we’re doing.”

Lamar Jackson tells the @RichEisenShow that defenses sometimes “are calling out our plays, stuff like that. They know what we’re doing.”

The optics on this: not great. pic.twitter.com/5Z16ysa4Ls

I could be wrong here, but I think if a defense knows exactly what you’re about to do it’s tough to run a successful offense.

“Calling out plays on the defense is nothing new,” Roman said Thursday, according to ESPN. “They’re going to be right sometimes [and] they’re going to be wrong sometimes. I think we know that. But that’s definitely an element of the game. It always has been and probably always will be.”

What we appear to have here is a failure to communicate.

Clearly, Jackson is frustrated with Baltimore’s play-calling, at least in the situations when defenses are guessing what they’re going to do. Essentially, Jackson took a bit of a jab at his OC, and now his coach is saying that it’s just part of being in the NFL and Jackson maybe just needs to adjust a bit more.

It’s been an interesting couple of days in Baltimore. The Ravens will be looking to win their second straight game on Sunday night as they take on the Patriots in Foxboro in primetime.