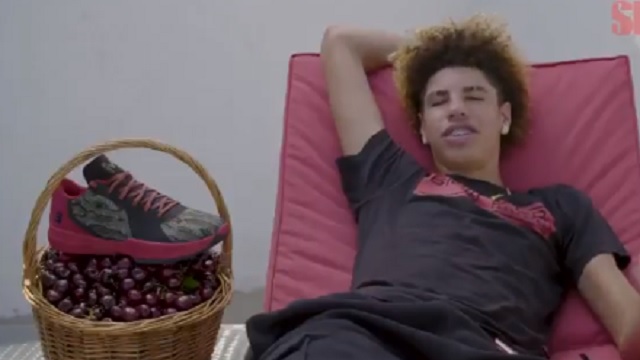 16-year-old LaMelo Ball has become the first high school basketball player ever to endorse his own sneaker after Big Baller Brand released the insanely priced $395 “MB1’s” this afternoon.

Today, LaMelo Ball becomes the 1st high school player ever to have his own signature shoe. The "Melo Ball 1" pic.twitter.com/3EpJuBA1EF

🚨 EXCLUSIVE: LaMelo Ball becomes the first high school player to have his own sneaker.

The low-cut MB1 features a two-tone woven textile with a camouflaged one-piece knit upper. BBB is touting it as one of the lightest basketball sneakers on the market. The red heel, black upper and shoe tongue are all made up of suede material. The tongue is a distinctively thin layer, which came at the request of Melo to provide him with less weight and more freedom around his ankles. The MB1 comes in priced at $395 and is slated to reach homes during the holiday season.

There are questions about this affects LaMelo’s NCAA eligibility but LaVar Ball doesn’t seem to worried.

“We’ll worry about it when we get there. Who cares? If he can’t play, then he can’t play. It doesn’t mean he’ll stop working out and getting better. … Maybe in two years they’ll change the rule and he’ll be able to the NBA straight out of high school.”

Big Baller Brand spokesman Alan Foster on if LaMelo shoe makes him ineligible: "We will leave that up to the NCAA."