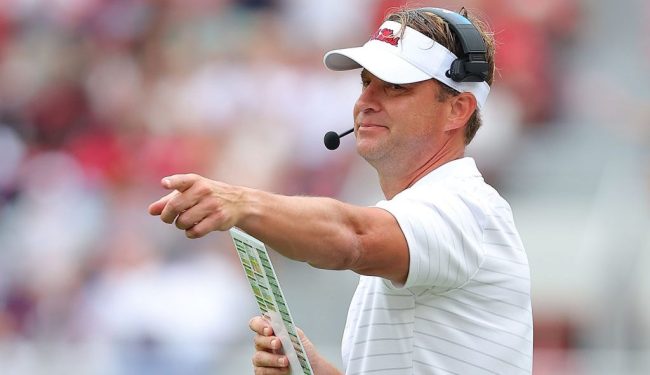 Ole Miss hosted College GameDay for only the second time ever on Saturday. The leaves were in their full fall color and provided for a beautiful backdrop and the scene in The Grove was truly special.

You've outdone yourself once again 😍 pic.twitter.com/S69lwxpH7f

To make things even better, the Rebels went on to stomp the Texas A&M Aggies in primetime to move to 8-2 on the year. Barring a catastrophic letdown against Vanderbilt next weekend, Ole Miss will travel to Starkville, Mississippi for the Egg Bowl on Thanksgiving Day with a potential New Year’s Six bowl on the line.

There is A LOT of momentum in Oxford, which is remarkable considering that the program was in a deep valley as of just two years ago.

At the forefront of the turnaround is head coach Lane Kiffin. When he took over the team in December of 2019, the entire culture changed.

Not only that, but he hired a great staff of elite coaches around him, recruited high-level talent, and instilled a winning mindset. The Rebels are relevant again and the town has rallied around the players and staff— two things that were entirely non-existent as recently as November of 2019.

Lane Kiffin is the reason.

While this season should be the focus, looking ahead at recruiting is a big part of college football. As such, there is a lot of hype about Arch Manning and his college decision.

He has visited quite a few schools this fall, including Ole Miss, and reportedly loved his time in Oxford. His father Cooper, uncle Eli and grandfather Archie, of course, are royalty in the town that Anthony Bourdain once called “a lovely, incongruously eccentric little island, a mutation, a college town, a magnet for writers, thinkers, and oddballs drawn perhaps by its rich literary tradition.”

Thus, the Rebels are heavily in the mix to sign Manning. Kiffin has made his desire to land the five-star quarterback very clear.

That was also the case on Saturday. Kiffin was the guest picker on College GameDay and could not have been more entertaining.

However, after the show ended, Kiffin had a game to coach. As such, he went back, changed out of his suit, and joined his team for the Walk of Champions.

For those of you who aren’t familiar, the Walk of Champions is when players and coaches at Ole Miss walk through a sea of fans at The Grove from the buses to the stadium. It’s a pretty incredible thing to witness in-person.

Anyway, about halfway through The Walk before the A&M game, Kiffin stopped for a moment to make a direct recruiting pitch to Manning. He walked over to the side of The Walk, grabbed a sign from the crowd, and held it up over his head.

Enough said. Kiffin wants to bring Manning to Oxford and is not afraid to let everybody know— even though it’s certainly no secret.