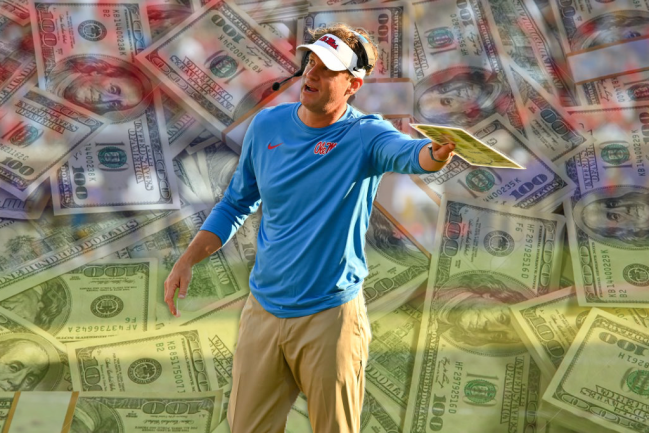 Lane Kiffin was able to celebrate his Week 8 win with the finest of liquors and caviar, hypothetically speaking. The 46-year-old head football coach at Ole Miss received a hefty bonus after dominating LSU 31-17.

What Kiffin has done to turn around a program that was dead in the water just two years ago is impressive and he’s getting compensated accordingly.

Kiffin, who is in his second year of a five-year contract, is making $4.5 million in 2021. And thanks to his bonus structure with the Rebels, he earned an extra $50,000 for reaching a sixth win and clinching bowl eligibility on Saturday.

He claims that he had no idea.

Lane Kiffin said he was not aware that #OleMiss became bowl eligible with Saturday's win until it was mentioned to him this morning.

In addition, should the success continue this season, Kiffin could really cash in. For each Southeastern Conference win starting with his fifth, he will earn an additional $150,000 bonus.

Ole Miss currently has three SEC wins with four in-conference games left. One of those remaining matchups is against Vanderbilt, so Kiffin will need to beat one of Auburn, Texas A&M or Mississippi State to earn that additional bonus.

Kiffin also gets a $100,000 bonus for every regular-season non-conference win over a Power 5 program. He earned that check in Week 1 against Louisville.

Beyond the regular season, Kiffin also has a few postseason bonus opportunities. If Ole Miss reaches the SEC Championship, he would make $150,000 and that number goes up to $400,00 if the Rebels win.

To recap, Kiffin has made the following amount in 2021:

Other bonuses on the table for Kiffin in 2021: