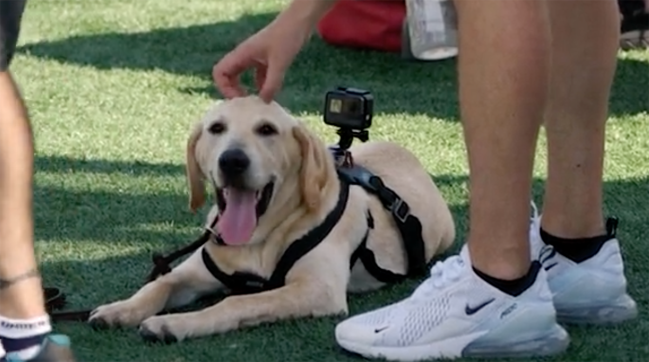 Lane Kiffin’s dog Juice has quickly become a social media star and it’s not hard to see why. He is absolutely adorable.

However, he has a little bit of a behavioral issue that Kiffin is trying to get under control.

Kiffin got Juice from Wildrose Kennels in Oxford back in April and could not keep the smile off of his face. The 47-year-old head coach of Ole Miss football was completely overjoyed to add the new yellow lab to his family.

Since then, Juice has blossomed into a star. Either Kiffin, his children, some staff members, or a combination of the three created a new Twitter account for the young pup and it has since amassed nearly 18,000 followers.

Not only does the account provide some hilarious quips about SEC opponents, it provides an inside look at Juice’s life.

Whether it be on vacation during the offseason…

Trying to teach my dad how to swim. All he does is stay in one spot pic.twitter.com/0n9EQhstXu

Hanging out and napping in the coaches office…

Or helping out on the recruiting trail…

Juice is a hit. How can you not love him?

While he is undeniably a good boy who deserves all of the boops, he has a little bit of an issue with his behavior. Juice can get a little bit crazy.

LOL JUST KIDDING ABOUT THAT TRAINING

YOU WANT ME TO BEHAVE? FEED ME LUNCH pic.twitter.com/lbLbkWPHS5

To help with his behavior, Juice is back in training and is doing a great job.

Thanks @wildrosekennels for coaching me today! The topic was SIT and I learned that quickly. pic.twitter.com/3wqR2ZaahT

That has allowed him to return to the sideline as Ole Miss takes to the gridiron for fall camp.

A famous dog is here, chilling in the shade with a water bowl. Can confirm @JuiceKiffin is being very good. pic.twitter.com/9VWoNaA2wo

On Monday, as the Rebels started the second week of camp, Juice wore a GoPro and provided a first-hand look at the day in the life of Lane Kiffin’s dog. It is as adorable as it sounds!

Rule 1 that I learned from the QBs: if the head coach whistles at you, you run and see what he wants pic.twitter.com/HddPfWC8bn

It looks like the training is paying off. Boop!