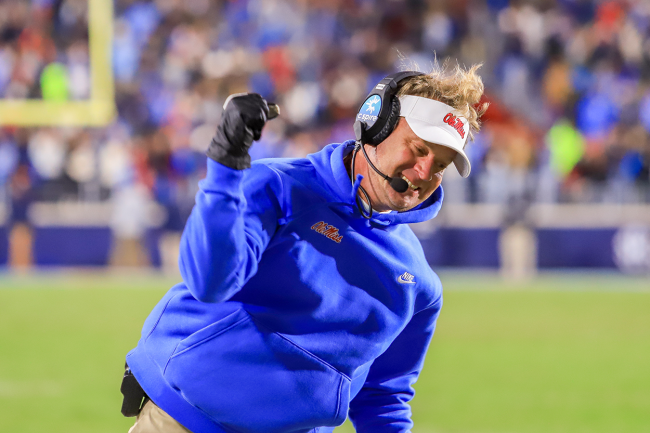 Lane Kiffin and Ole Miss football wrap up the spring practice period with its annual Spring Game on Saturday. Once the final whistle blows, there will be about three and a half months in which the workload for players and coaches lightens up just a little bit.

Perhaps knowing that something of a lull period (although it’s still minimal, especially with the transfer portal) is coming up, Kiffin has found a new way to occupy his time. The 46-year-old head football coach got a puppy.

He stopped Wildrose Kennels on Wednesday and picked up the newest member of his family, and adorable yellow labrador. While Kiffin is not often one to show emotion and is typically rather stoic or dry in his demeanor, he could not have smiled any bigger while holding his new dog.

Look at the pure joy on Lane Kiffin’s face as he held his new yellow lab puppy:

Wildrose Kennels is based out of Oxford, Mississippi and has a phenomenal reputation in the south, across the country, and even around the world. It is the oldest, largest and most diversified producer and trainer of British and Irish Labradors in North America.

Wildrose’s labs are regarded among wingshooters and adventurers as the finest, most versatile sporting dogs in the world. But Kiffin’s new dog is likely more of a house dog than a hunting dog.

Either way, whether used in the field or not, the little yellow lab could not be cuter. Kiffin is going to have his hands full with the young pup, but his children will finish up school in the next month or two and will presumably be around to help out.

The only question left unanswered is — what is the newest Kiffin puppy’s name?!