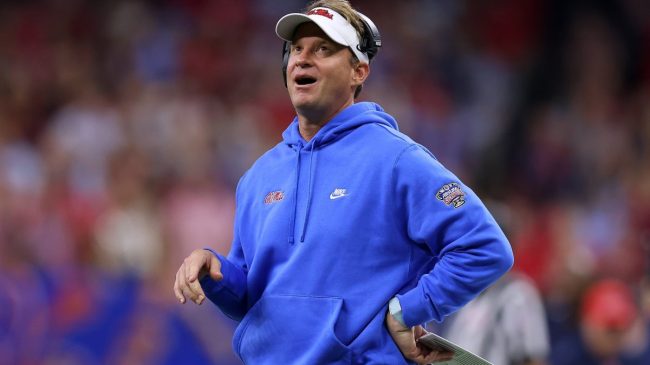 Lane Kiffin has never been one to bite his tongue, particularly when the topic of conversation revolves around one of his rivals. And he’s made many over the years.

But there’s undoubtedly one that stands out when talking about Kiffin. The Tennessee Volunteers.

I mean, who else can say they’ve been pelted with golf balls by an opposing fanbase following a win on the road?

Kiffin’s hatred from the fans has been earned. The former Volunteer leader bolted for the West Coast following just one season after the school gave him his first head coaching opportunity. Now, he finds himself back in the SEC, and he’s never shy about ragging on his former employer.

This weekend brought about the perfect storm, too, with Ole Miss finding its way into the College World Series. No. 1 ranked Tennessee was upset by Notre Dame, effectively ending what could’ve been a historical season.

That series of events gave Kiffin the perfect opportunity to stir the pot.

Kiffin was active on Twitter following the baseball weekend, retweeting a number of celebratory posts for the Ole Miss baseball program.

Of course, he couldn’t help but jab at Vols fans, too.

He reposted a couple of anti-Tennessee messages throughout the weekend.

That, in turn, got quite the reaction from the Tennessee faithful. Kiffin went toe-to-toe with a few fans on social media as he ribbed the Vols for missing out on Omaha.

Awesome thanks for asking!! We are watching @OleMissBSB advance to the @CWSOmaha !! What are you guys today in Knoxville?? 🤔 https://t.co/OOJbD4stgn

He’s taking it a step further on Monday. Lane Kiffin’s now trolling the university from his dog’s Twitter account.

Lane Kiffin (or someone close to him) is now tweeting out from his dog’s account.

Did something happen between @Vol_Football and my dad before I was born? It seems like they don’t like him for some reason

Again, Tennessee seems to be the target.

.@Lane_Kiffin I don’t get what’s the big deal? The fans were just trying to play fetch with you you should be honored https://t.co/89xn6BGdgd

And Vols fans are BIG mad with the antics following a surprising end to their baseball season.

Can’t you read? This is Juice https://t.co/KOO2prA8Cg

Excellent troll job by Kiffin (and Juice). The Vols won’t get their shot at Kiffin on the football field this year unless both Ole Miss and Tennessee make the SEC title game. Even if the two foes don’t meet on the gridiron, you can bet that Kiffin will still draw the attention of the Volunteer fanbase.