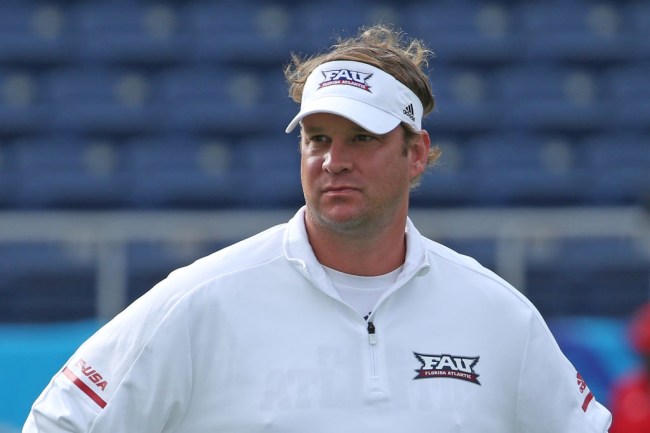 Lane Kiffin’s FAU Owls lost at home to Marshall 36-31 on Saturday and after the game, Kiffin took to Twitter and did what any 44-year-old head coach would do and fired up the meme machine.

He clearly wasn’t happy with the officiating on Saturday so posted a blind ref meme and tagged the official account of Conference USA.

You have to respect it, really. Kiffin will be Kiffin, always, and you’re not going to see any other coach out there pull that kind of stunt on social media. Plus, he didn’t even have the time to delete the tweet.

Kiffin woke up on Sunday and was slapped with a $5,000 fine for the tweet for violating the league’s sportsmanship policy, but it’s pretty clear he couldn’t possibly care less about the fine.

Losing $5,000 doesn’t seem to get Kiffin too frustrated.

Kiffin spoke to ESPN about being fined for the meme and decided to take a subtle jab at LeBron James while doing so.

“I just lost $5,000 for a tweet,” Kiffin told ESPN on Sunday. “We have freedom of speech, but I guess around here there’s no such thing as freedom to tweet. Maybe LeBron James will come out and comment about it tomorrow.”

Kiffin also told ESPN he spoke with the Conference USA office, and they agreed there were “inconsistencies” in the game’s officiating, and they planned to look further into the matter.

What’s incredible about this entire story is that following the game, in which FAU was flagged nine times for 90 yards, Kiffin told the media he wasn’t going to speak on the officiating and that the school’s assistant AD even told him not to speak on it.

“I already made the decision I’m not going to get into officiating,” Kiffin said. “I don’t know if we lose money in this conference — we probably do — and I don’t have a lot anymore. I’m not going to lose any. I’m about to say what I want to say, but I’m not going to. The assistant AD is back there shaking his head like, ‘Hey, don’t say what you want to say.’ I’m not gonna say anything.”

The man just couldn’t resist firing off the meme in the long run though. Again, Kiffin is gonna Kiffin.