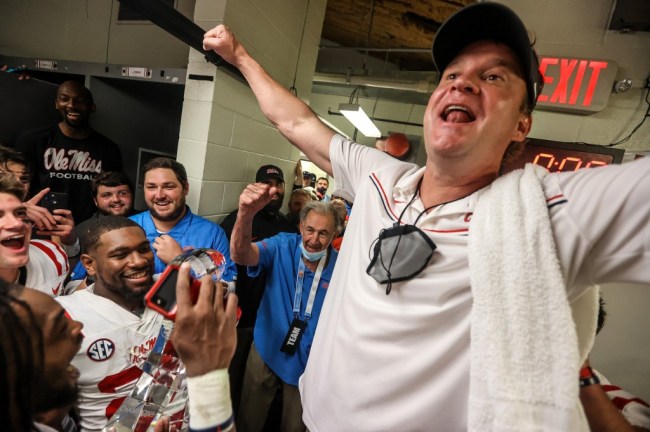 Lane Kiffin’s coaching career has been nothing short of exhilarating. Whether he likes it that way or not, the 45-year-old has been at the center of the spotlight since his time at Southern California in the early 2000s and the notoriety only continued to grow when he became the youngest head coach in the NFL’s modern history with the Oakland Raiders in 2007. Kiffin has made five stops since then and most recently became the head coach at Ole Miss in December of 2019. His position with the Rebels is not the first time that he has stepped foot in the SEC, having previously served as the offensive coordinator in Tuscaloosa under Nick Saban and as the head coach at Tennessee for one year in 2009. That one season with in Knoxville caused quite a ruckus amongst Volunteer fans upon his sudden departure, but his recent track record of success has them longing for his return.

There is a rock on campus at UT that they literally call “the Rock” and it is considered a place of free expression. The school calls it “a public canvas where thousands of artists have expressed themselves.” Really it’s just a thing to paint with fun messages because there is nothing else cool about Knoxville. With a lot of disapproval surrounding the Vols’ current head coach Jeremy Pruitt, there have been calls for his firing and rumors around his departure. One fan hinted (read: begged) at the idea of bringing Kiffin back in Pruitt’s place, but the Ole Miss head coach just laughed. His response says it all.

Kiffin was formally introduced as retired head coach Phillip Fulmer’s replacement on December 1, 2008 and earned the title of youngest active head coach in Division I FBS football at the time. He led the Vols to a 7-6 record, which was an improvement over the 5-7 record from the year prior. It wasn’t perfect, but things were on the right track and recruiting would only help with returning to prominence.

While on the recruiting trail, Kiffin was quick to make his mark on the conference. He publicly accused then-Florida, soon-to-be Jacksonville Jaguars head coach Urban Meyer of violating NCAA rules at a booster meeting in Knoxville.

“I’m going to turn Florida in right here in front of you,” Kiffin said. “As Nu’Keese (Richardson) was here on campus, his phone keeps ringing. And so one of our coaches is sitting in the meeting with him and says, ‘Who is that?’ And he looks at the phone and says, ‘Urban Meyer.’ Just so you know, you can’t call a recruit on another campus. But I love the fact that Urban had to cheat and still didn’t get him.”

However, when Pete Carrol left Los Angeles for the Seattle Seahawks job, USC offered Kiffin to be his replacement. He accepted.

When Tennessee athletic director Mike Hamilton was asked for an assessment of Kiffin’s tenure, he responded with just one word: “Brief.” Students had a different, more visceral reaction to the news and rioted on campus. Hundreds gathered outside of Neyland Stadium and burned couches, Kiffin T-Shirts, mattresses and anything else that was related to the coach’s short time in town.

The riots lasted throughout the night and his return to Neyland Stadium with the Crimson Tide in 2016 was met with a resounding hatred for Kiffin throughout the entire stadium. Alabama went on to win 49-10 without any doubt and Kiffin had one last troll on his way out.

As for his current situation, Kiffin just received a contract extension from Ole Miss that extends him to four years, the maximum number allowed by the state of Mississippi. Matt Corral was the nation’s top quarterback in QBR and total offense last season and returns for 2021 to lead a group of explosive athletes that hung more points on Alabama than both Notre Dame and Ohio State in the College Football Playoff. He has no reason to leave, much less for a Tennessee team that is stuck in a revolving cycle of high-expectations, mediocrity and disappointment. Even if his son is named Knox after the city, they call him Knoxford now, after Oxford, Miss. He’s long moved on from the Vols and is focused on finishing strong in recruiting and preparing a “way-too-early” top-25 team for the fall. To make things even more interesting, the Rebels travel to Knoxville next season.