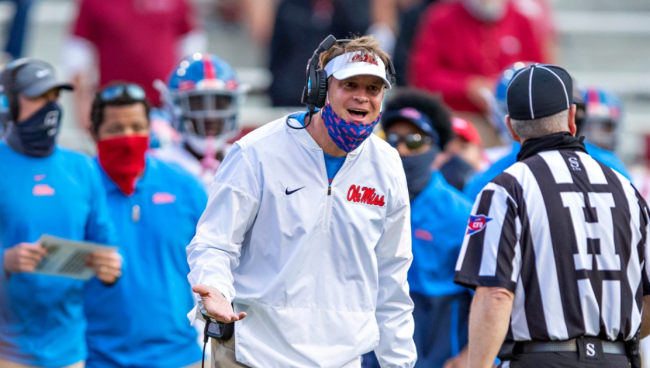 Lane Kiffin went 7-6 in his lone season as Tennessee’s head coach in 2009 before bolting for Los Angeles to take over as head coach at USC. Volunteer fans were beyond livid. Here’s a young coach that had things rolling in the right direction after filling the gigantic shoes of Phillip Fulmer, but the West Coast came calling and Kiffin simply could not refuse.

Most Volunteer fans would point to Kiffin leaving Tennessee as the start of the mediocre trend the program has been on ever since.

Tennessee has won more than six games just four times over the last 11 seasons and will soon hire its fourth head coach since 2010 after recently parting ways with Jeremy Pruitt. Despite the fact that Kiffin was the most-hated man in Tennessee for months after he left Knoxville in such dramatic fashion, Volunteer fans want to see him back on Rocky Top thanks to the success he’s had picking himself back up after being fired by the Trojans in 2013.

Kiffin went 28-15 at USC, made a successful stop in Tuscaloosa as Alabama’s offensive coordinator, completely changed the FAU program winning two conference titles in three seasons, and led Ole Miss to a 5-5 record in his first season in Oxford.

Kiffin is yet again one of the hottest coaches in college football and as the majority of Tennessee fans – and college football fans in general – are delusional, they want the Vols to go out and poach Kiffin from Ole Miss. Tennessee also hired Danny White as its athletic director, who has Ole Miss and Kiffin ties, so you add that into the mix and you have a full recipe of Kiffin being a Volunteer again, apparently.

Some Tennessee fans don’t seem to be too worried that the NCAA is currently investigating the Tennessee football program for alleged recruiting violations and all signs point to some sort of penalty being handed down. Nor do they seem to care that Kiffin just signed an extension with Ole Miss that includes a ‘healthy‘ buyout.

You may be thinking to yourself that Tennessee fans are just messing around by actually wanting Kiffin back in Knoxville and believing there’s a chance it may actually happen. As a Tennessee graduate myself I can tell you with 100% certainty that there are many UT fans that are all-in on Kiffin leaving Ole Miss to return to Knoxville and will be devastated when the school announces it has hired anyone but him.

Crazier things have indeed happened, but come on. Tennessee is under new leadership and most of the old guard is out of Knoxville, but what exactly is the appeal for Kiffin to leave an Ole Miss team primed for a solid 2021 season for Tennessee, the team in worse shape than any other team in the SEC not named Vanderbilt?

Here’s a tweet from Houston Kress, a respected media member in Knoxville with 42,000 followers on Twitter throwing serious gasoline on the fire. This tweet shows that even he has some belief, even if it’s just the tiniest of inklings, that Tennessee actually could re-hire Kiffin.

Hire Lane and tickets are SOLD.

Kiffin added to the hysteria himself because that’s just the way he operates.

Other Tennessee fans are fully on board with the idea of Kiffin returning to Knoxville.

Basilio: And I quote: When Pruitt was fired Lane Kiffin sent texts to two prominent boosters at Tennessee and told them “I’m ready to come home”. #Vols GAWWWW! pic.twitter.com/ADdf7O4RdN

The man turned Jonathon Crompton into a compentent SEC QB. That’s one step below turning water into wine. Lane Kiffin deserves to be the savior of Tennessee football.

I know it’s basically a meme at this point but we gotta be honest, hiring Lane Kiffin would send Tennessee fans to the moon, sell tickets like crazy, and probably lead to a lot of wins for Vol football. Seems outlandish but he actually meets all of the program’s needs.

I agree man, Lane Kiffin was born to break Tennessee hearts only to come back a decade later and lead us to the promise land!!!