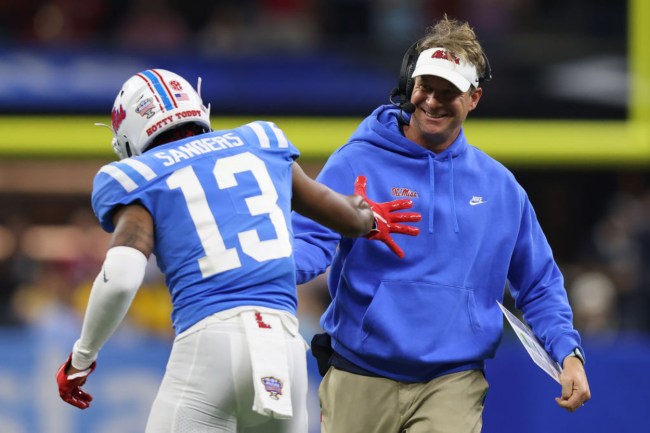 Lane Kiffin has proven yet again that nobody in college football is better at Twitter than he is, this time making an example out of former Ole Miss head coach Hugh Freeze.

Understandably, not everyone keeps up with social media trends within the Ole Miss world, so we need to share some context before diving into Kiffin’s burn of Freeze.

Freeze was the head coach at Ole Miss from 2012-2016 before things ended rather publicly and phone calls to escort services. One of the things Freeze did and still does now as the head coach at Liberty is tweet ‘Yahtzee’ usually accompanied by a picture of a big fish whenever he lands a big commitment.

After Freeze earned a notable commitment earlier this week, he did his usual and tweeted a picture of him holding a big bass.

On Thursday, Kiffin and Ole Miss landed former five-star running back Zach Evans as he committed to the Rebels after entering the transfer portal from TCU. Being the king of Twitter as he is, Kiffin shared a picture of him holding a huge Mahi Mahi and wrote ‘it just means more’ in a quote tweet of Freeze’s photo.

Some people can’t stand how active Kiffin is on Twitter, but even if you’re a Kiffin hater, him trolling the former head coach of his current employer is legitimately funny.