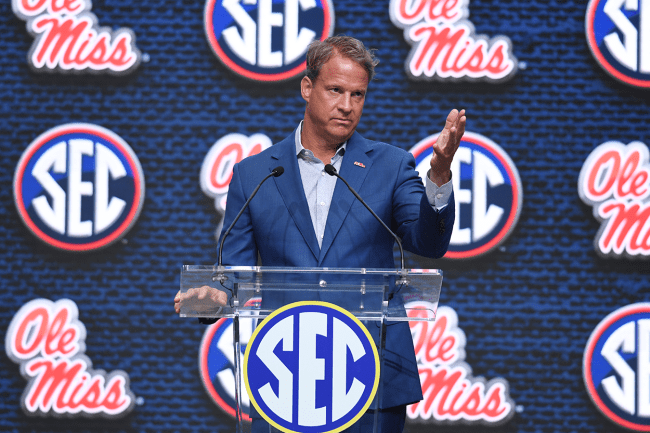 Lane Kiffin is a TikTok star, whether he wants to be or not. The 47-year-old head coach of Ole Miss football does not have an account of his own, at least publicly.

His daughter Landry, however, has brought him to viral stardom on a few different occasions.

Earlier in the spring, Landry involved her father in the “ugly baby trend” and caught Lane’s incredible reaction to an uncomfortable moment involving a fake FaceTime call. A few months later, in July, Landry followed it up by posting her dad’s hilarious reaction to how much that she and her sister spent at a clothing store on Black Friday. Lane was STRESSED.

Different from previous years, Landry is attending school in Oxford this fall. That may lead to more videos of Lane throughout the year now that they will be together more often.

Landry posted another TikTok in which her dad is the star. She and some of her senior in high school friends synced up to a trending audio from The Kardashians.

Landry and her friends jokingly ask Lane if he will set them up with some of his Ole Miss football players. The camera then flips to Lane, who mimics one of the Kardashians saying “no, thanks.”

Lane, though he is a willing participant, does not seem particularly enthused by being in the video but he is a good sport and it resulted in another hilarious Kiffin moment.