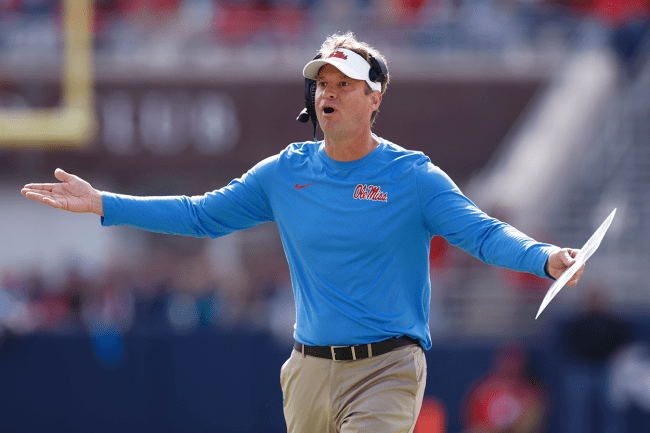 When it comes to college football, there are few bigger (if any) characters greater than Lane Kiffin. The 47-year-old head coach of Ole Miss football never fails to speak his mind, even when the situation might not call for it.

That was certainly the case on Friday as he unknowingly partook in a viral TikTok prank.

For those who are unfamiliar with the ‘Ugly Baby’ trend, it’s pretty straight-forward. It involves the person filming and an unsuspecting participant.

The person with the camera pulls up the front facing camera with a photo of an “ugly baby” in the top right corner. The cameraman or woman proceeds to show the photo to the other person and says that it’s the newborn baby of someone they know.

After seeing the photo, the unsuspecting participant gives his or her immediate reaction to the “ugly baby,” which is usually shock or confusion. From there, the camera person pretends that they are live on FaceTime and offers a comment about how cute the baby is.

In this case, it was Kiffin’s daughter Landry who was holding the camera. She approached her father with the photo of the “ugly baby” to which Lane had an absolutely hilarious, astonished reaction. When Landry tried to play it off like they were on FaceTime, Lane still looked completely baffled.

Despite his clear confusion, Lane offered a very forced “so cute” about the baby. Take a look:

Lane never fails to be the funniest coach in football. Landry got him good.