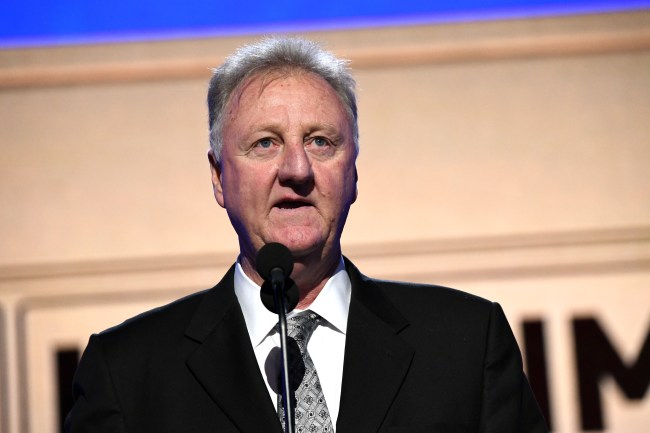 Larry Bird was one rotten tomato on the basketball court — towards his opponents, anyway, as the Boston Celtics legend was ruthless AF when it came to trash-talking and challenging defenders. But there’s a new picture making the rounds on the Internet this morning that sees Bird as something else: Just a tomato.

Since it’s the year 2020 and people have nothing better to do with their time since we’re all locked inside due to a global pandemic, some good people on social media posted a photo of a tomato with a tiny hat on. Oddly enough, as soon as sports fans on Twitter saw the picture, they couldn’t help but identify it as Larry Bird — and the resemblance sure is canny.

You can’t seriously look at that tomato and deny that fact that it’s Bird’s doppelganger. The eyes. The elongated nose. drooping mouth. Everything about that is Larry Bird — well, except for the fact that it’s a tomato and not one of the greatest shooters in NBA history.

As mentioned above, as soon as people on Twitter saw the photo, they all had to call out the fact that the fruit was essentially Bird. Take a look below at some of the A+ responses.

Larry Bird trending because someone found a tomato that looks like him is a throwback to a simpler time on Twitter https://t.co/TUoCMFHPvZ

Am I trippin ? Or does this tomato look like Larry Bird ? https://t.co/ZWs30o9kdH

In a time when most of us are going down a rabbit hole on social media and freaking ourselves out with all the bad news going on around the world, I personally need to thank those who decided to take it upon themselves to have a little fun in comparing a tomato to Larry Bird. Instead of seeing his name trending on the app and thinking “dear lord, what happened now?,” we all got something to laugh at for a quick second. Man, I really hope Bird replies with some snarky remark after seeing this, because this shit’s too perfect for him to ignore.