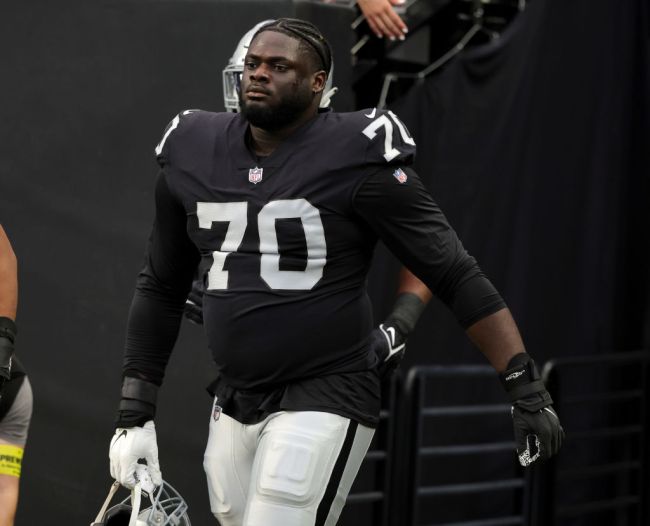 The Las Vegas Raiders already made on big decision about their offense this week when they released running back Kenyan Drake and now it seems they could be prepared to make another surprising cut on that side of the ball.

The Raiders may be ready to make a move that you don’t often see from NFL teams. According to the Las Vegas Review Journal’s Vinny Bonsignore, the Raiders might cut Alex Leatherwood, their 1st round pick from just a year ago.

The @Raiders face a big decision on Alex Leatherwood, and all options are currently on the table – including trade or cut: https://t.co/0f8nMtGa5r

The Raiders spent the 17th overall pick in the 2021 draft on Leatherwood, a decision that at the time was questioned by many. Leatherwood had been projected to be picked late in the 1st round or some time in the 2nd ahead of the draft and at the time the Raiders made their pick, there were some linemen available that were believed to be better options.

Leatherwood’s rookie season did not change that perception. Leatherwood had a brutal rookie year, allowing the 2nd most sacks by a guard with 8 and committing the 3rd most penalties at the position with 14.

Ahead of this season, Leatherwood had been moved to right tackle, but has already seemingly been replaced at that position. This has left the Raiders with few options for the former 1st rounder unless they can find a trade partner interested in him.

The Raiders have already moved on from the head coach and the GM responsible for the organization reaching on Leatherwood and now it appears they may be ready to move on from him as well.