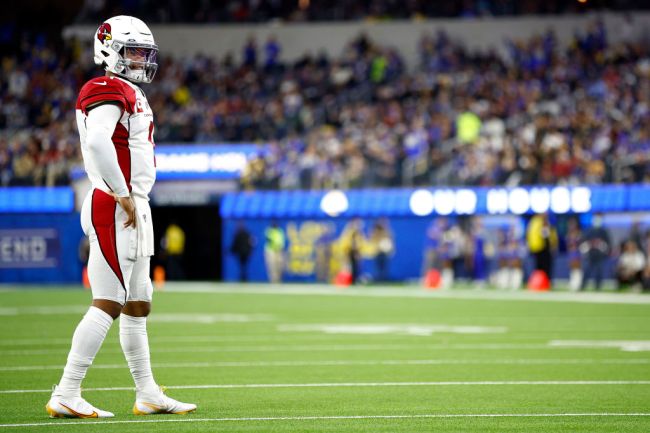 This summer has been a big one for quarterbacks getting paid in the NFL. Aaron Rodgers signed a contract worth $50 million per year. Deshaun Watson got himself $46 million per year fully guaranteed in spite of his off-field issues. Matt Stafford signed an extension for $40 million per year. Even Derek Carr got in on the action yesterday for $40.5 per year.

Now there are two more quarterbacks left that we can expect to see get paid sometime soon. One of them is Lamar Jackson, but it seems like the Ravens are ready to pay him whenever he’s ready to negotiate.

Then there’s Kyler Murray. This offseason has been a weird one for Murray. It started with him deleting the Cardinals from his Instagram and then being accused of not being the greatest teammate. After all of that blew over, it seemed like he was in a good place with the Arizona Cardinals.

However, that might not be the case based on a report from NFL Network reporter Tom Pelissero.

The #Cardinals have yet to make a contract offer to Pro Bowl QB Kyler Murray, whose agent, Erik Burkhardt, informed the team weeks ago he was pulling his opening proposal off the table, per sources.

Kyler Murray is still only heading into the 4th year of his rookie contract, which means the Cardinals still have the option to keep him for 2 more seasons without a new contract, but this looks like it is going to get contentious.

If there’s anything we’ve learned about the NFL this offseason, it’s that there is just about no trade that is off the table. Davante Adams forced his way out of Green Bay. Tyreek Hill was shipped to Miami. Russell Wilson is a Bronco now. The Browns traded for Deshaun Watson before they even figured out what to do with Baker Mayfield.

Reports like this are only going to fuel the speculation that Murray could be dealt by the Cardinals. The reports earlier this offseason didn’t make it seem like the relationship between the team and the player was in the best spot and the Cardinals might decide securing a massive trade haul for him before he eventually leaves in free agency might be the move for them.

There are still teams out there who could make the Cardinals some intriguing offers. The Giants currently hold two of the top 7 picks in this season’s NFL Draft and would likely throw in a few more premium picks for Murray.

The Texans have picks 3 and 13 and a pair of 1st rounders next season that could both end up in the top 15.

The Lions could offer the Cardinals 3 picks in the top 34 this season, including pick 2.

This could all just be posturing from both sides of the negotiation, but there appears to be trouble in paradise for Kyler Murray and the Arizona Cardinals.