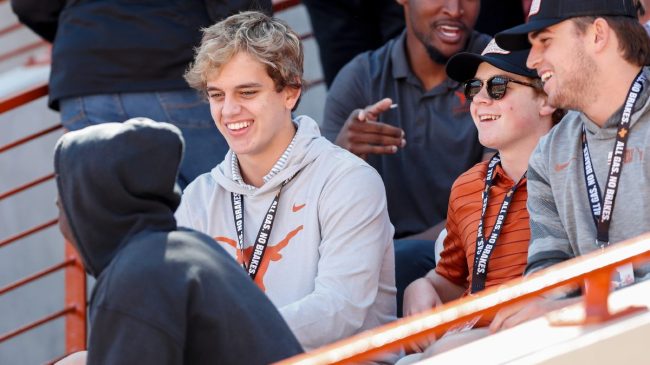 The race to land the commitment of Arch Manning is on.

Manning, the nephew of NFL greats Peyton and Eli Manning, is the top-rated passer in the class of 2023. His recruitment has been headlined by three main suitors to this point, as he’s appeared to narrow his list to Georgia, Texas, and Alabama.

Ole Miss, the school his uncle and grandfather played for, was once in the running, but the Rebels have lost a bit of steam on the recruiting trail. Others like Clemson, LSU, and Florida are far behind, too.

Manning has taken this offseason to make his visits. He’s seen Athens. He’s been to Austin. And after a trip to Alabama this past weekend, he’s seen Tuscaloosa, too.

With all three trips behind him, there appears to be a new leader in the clubhouse. At least according to one major recruiting site.

After visiting Athens, Austin, and Tuscaloosa the past few weekends, the On3 Recruiting Prediction Machine gives Alabama a slight edge over Texas and Georgia to land Five-Star Plus+ QB Arch Manning… 🐘🤘🐶

On3 Recruiting now has Alabama as the slight frontrunner, besting Texas and Georgia. The Longhorns have long been considered the favorite to land the talented passer, but maybe that recent trip to see coach Saban changed his mind.

These projections are based off of the site’s “Recruiting Prediction Machine,” which utilizes things like social media interaction, visit tracking, fan site insider opinion, and coaching staff success rates to pinpoint where recruits might end up.

Manning still has another season of high school football ahead of him, so this is likely to change as the year progresses. As of now, though, Alabama could be on top.