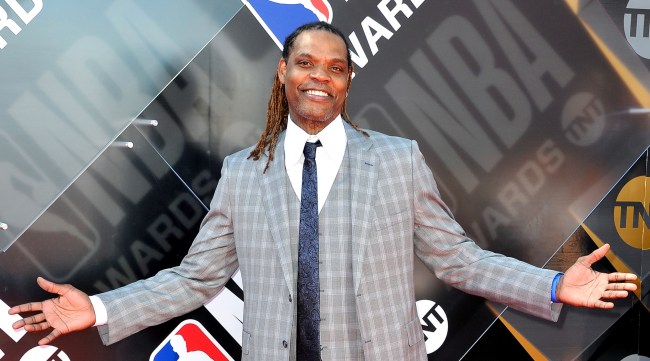 Four-time NBA All-Star Latrell Sprewell played 13 seasons with the Warriors, Knicks and Timberwolves. Over those years he earned $97,060,000 (around ($144 million adjusted for inflation).

Following the 2003-04 season where he averaged 12.8 points per game – his career-low, Minnesota offered him a three-year contract extension worth $21 million. (He had earned $14.6 million the previous year – left over from his contract with the Knicks.)

Sprewell infamously turned down the offer, saying, “Why would I want to help them win a title? They’re not doing anything for me. I’m at risk. I have a lot of risk here. I got my family to feed.”

He never played in the NBA again.

On Thursday, he created a GoFundMe looking to raise $35,000 to help his graddaughter who has leukemia, reports BasketSession.com.

“Hi Everyone My name is Latrell Sprewell yes correct!!! The former NBA player. I am in need My granddaughter is battling cancer. So any donations will help my granddaughter Tessa beat cancer she is very 1 year old and is fighting . Anything will do but I would just like to try to save her life she means the world to me and her mother. Thank you for everyone taking the time to donate. She has been Diagnosed with leukemia.

I’m grandfather to Tessa . She’s been a gift of joy since she became part of are family. All the donations raised will be help to pay for her medical bills and travels to her medical appointments. The Beneficiary on this is Cameron Carson my daughter Tiffany boyfriend.

After the donations are done giving I will present my daughter family will alll funds raise to help my granddaughter Tessa out with cancer Treatments.”

After his NBA career came to an end, Sprewell was sued by his wife for $200 million, had his yacht named “Milwaukee’s Best” repossessed, defaulted on his $1.5 million mortgage, and had to pay over $3 million in back taxes.

Hopefully, Sprewell’s granddaughter will get the helps she needs.