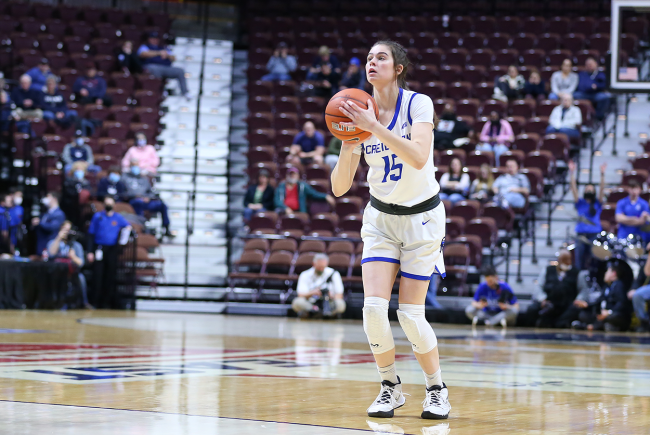 During Lauren Jensen’s entire freshman season at Iowa, the 5-foot-10 guard scored 23 total points. On Sunday, she scored 19 points in front of 15,000 Iowa fans to send Creighton to the Sweet 16. It was a cold-blooded performance all the way up until the last shot.

Jensen, a Minnesota-native, signed to play for the Hawkeyes in 2020. She spent her first year on the collegiate level in Iowa City and mostly sat on the bench as the University of Iowa women’s basketball team reached the Sweet 16.

After the season, Jensen chose to enter the transfer portal and ended up at Creighton. In her second year on the collegiate level, and first with the Blue Jays, she averaged about 29 minutes, hit about 44% of her shots and scored about 12 points per game.

Jensen’s numbers during the 2021/22 season were a big step up from her time at Iowa and she played a crucial role in Creighton’s run to the NCAA Tournament.

She also played perhaps the most important role in the NCAA tournament.

10-seed Creighton traveled to Iowa for the First Round of March Madness and beat 7-seed Colorado. The upset win set up a matchup against Iowa, Jensen’s former team.

In a back-and-forth Second Round battle, the Blue Jays hung around with the 2-seeded Hawkeyes. Jensen, who scored nine of her team’s last 10 points, also hit the dagger.

With less than 15 seconds left, Jensen got the ball at the top of the arch and put up a deep triple. It went in. Creighton won.

Jensen, against her former team, hit the game-winner to send her 10-seeded new team to the Sweet 16. Ice. Cold.