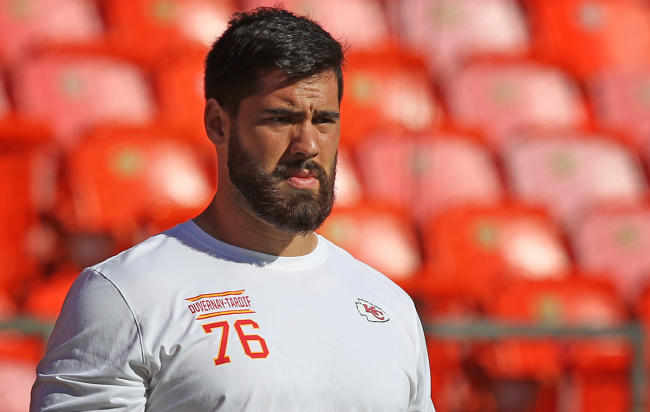 While most professional athletes decided to shoulder the burden that comes with playing a sport in the middle of a pandemic, more than a few of them decided to opt out of their seasons due to a variety of factors—none of which were more admirable than the reason that led to Kansas City Chiefs offensive lineman Laurent Duvernay-Tardif deciding to sit out.

A few years ago, Laurent Duvernay-Tardif attempted to convince the NFL to allow him to throw “M.D.” on the back of his jersey as he was finishing up medical school only to see the powers that be further cement the organization’s reputation as the No Fun League when they ultimately denied his request.

Duvernay-Tardif has one of the more fascinating backstories that you’ll ever encounter, as he played football for four years at Canada’s McGill University before the Chiefs decided to take a chance on him by picking him up in the sixth round of the 2014 NFL Draft. The bet paid off, as it didn’t take long for him to earn a spot as a starter, and his impressive performance led to him securing a $40 million contract in 2017.

While a leg injury kept him sidelined for the majority of the following season, he made his grand return last year during a campaign that ended with him hoisting the Lombardi Trophy. However, when the pandemic arrived, he took his medical talents back to America’s Hat, where he’s still putting his expertise to good use while helping combat the crisis as a frontline worker in Quebec.

As a result, he’ll be forced to watch from Canada when Kansas City faces off against Tampa Bay at the Buccaneers’ home stadium, but based on what he had to say during a recent conversation with The Washington Post, he doesn’t have many regrets when it comes to his decision to sit this season out.

It didn’t take long for Duvernay-Tardif to understand the gravity of the situation he found himself thrust into when he signed up for a job as an orderly at the facility where he’s been stationed since last year, and while he continued to train for the season in between shifts, he became the first NFL player to opt out over the summer after realizing the pandemic wasn’t going anywhere at any point in the near future.

The lineman’s decision was motivated by both his determination to help ease the stress the situation had put on his coworkers and fears about contributing to the crisis if he found himself playing a role in spreading the virus over the course of the season. While he admits to questioning the move as the Chiefs gradually marched toward their second consecutive Super Bowl, he maintains the sobering encounters he’s had (in addition to a few uplifting ones) have reaffirmed he made the right call.

He may have missed out on his chance to play in another Super Bowl, but even if he’s not there to watch his teammates secure another trophy, he’s already added another piece of hardware to his collection, as he was awarded the Lou Marsh Trophy last year, an annual accolade given to the best athlete Canada has to offer.

I think it’s fair to say he earned it.