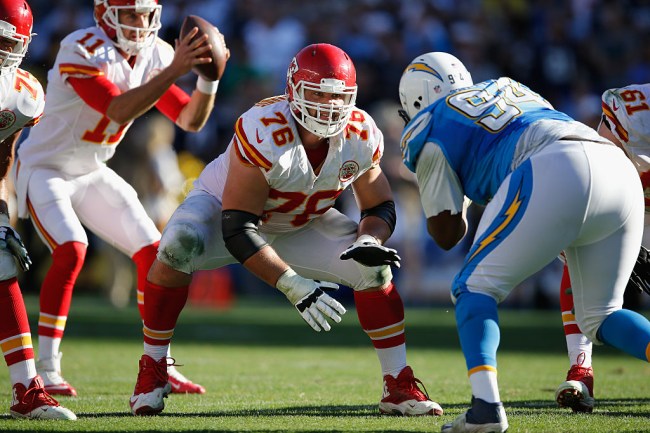 A few years ago, the NFL had firmly (and rightfully) earned the nickname “The No Fun League” based on the vast number of rules seemingly designed to suck almost every tiny moment of joy out of the game, whether we’re talking about their strict approach to touchdown celebrations and bans on some of the very sick custom cleats that athletes have commissioned to take their shoe game to the next level.

Thankfully, the league has (kind of) seen the error of its ways. Last year, it relaxed its cleat rule to let players wear them onto the field during pregame warmups and told refs to let players actually celebrate after scoring a touchdown, which led to a number of awesome celebrations after scores last season. Sadly, it appears the NFL still hasn’t totally removed the tree branch wedged up its backside.

A few months ago, Kansas City Chiefs lineman Laurent Duvernay-Tardif reached out to the NFL after he earned his doctorate upon graduating from medical school, making basically everyone else feel bad about how much they’ve achieved in life in the process. He was curious about the prospect of putting “M.D.” next to his name on the back of his jersey.

Sadly, TVA Sports’ Andy Mailly-Pressoir says his hyphenated counterpart has had his request denied by the NFL.

According to my French-speaking finacée, this roughly translates to “Not gonna happen.”

I’m split about how to feel about this. On one hand, there is nothing more insufferable than someone who gets a doctorate and insists you refer to them by that title. On the other hand, the NFL lets players whose parents and grandparents didn’t feel like getting creative with names put “III” on the back of their jerseys, so I don’t think adding “M.D.” is really that unreasonable.

I’m not sure how important this actually is to Duvernay-Tardif, but if he really cares, at least he won’t have a problem if he defects to the XFL in a couple of years.