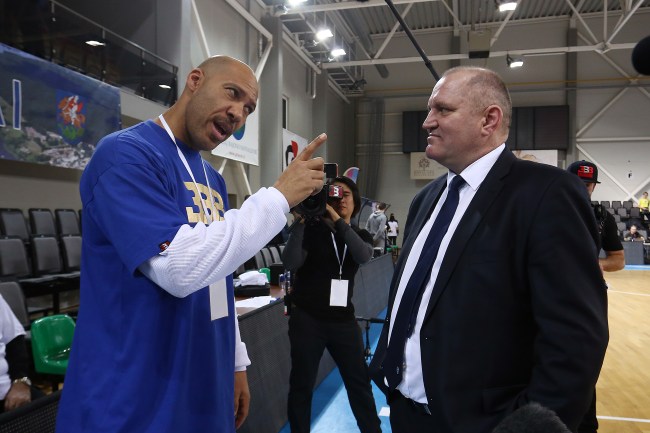 LaVar Ball might want to think he’s a larger than life figure in basketball, but, let’s face it, who’s he trying to fool? Don’t get me wrong, the dad of the Ball Brothers — Lonzo, LiAngelo and LaMelo — is entertaining as all hell, but this grand illusion that he’s going to singlehandedly impact the sport of hoops is a little ambitious. That won’t stop LaVar from trying, though.

And, in his latest move to do so, LaVar Ball is creating his own High-School All-American Game because, shocking, he’s pissed off that his youngest son, LaMelo, wasn’t invited to participate in two of the biggest games for a star recruit; the McDonald’s All-American Game and the Allen Iverson Roundball Classic. In McDonald’s case, the event claimed that, because LaMelo Ball played professionally in Europe before joining a high school squad in Ohio, he wasn’t eligible. This is despite ESPN’s recruiting rankings having the youngest Ball Brother a 95 overall, as well as its 13th overall prospect in the class of 2019 — which is where LaVar seemed pretty pissed.

With this not sitting well with LaVar Ball, he did what any supportive dad would do — and decided to start his own All-American Game for Big Baller Brand that, according to the announcement on Twitter, “will feature some of the top high school athletes in the country alongside Melo.”

The first ever 🅱️🅱️🅱️ All American Game will feature some of the top high school athletes in the country alongside Melo.

Here’s the thing, though, LaVar, because NCAA rules prohibit high school players from participating in more than two All-Star events, something tells me that this Big Baller Brand All-American Game will be picking a litter from second-tier players, not guys who are necessarily expected to be future stars on the college and, possibly, NBA level. And, if we’re being honest, does anyone not named LaVar Ball really think any of the top-25 high school prospects in the country are going to choose BBB’s game over the nationally-televised contests of the other major games; which also includes the Jordan Brand Classic? Doubtful.

With the Big Baller All-American Game taking place at the end of the month — and just being announced a couple of days ago — it’ll be interesting to see which players LaVar Ball can get to participate. Something tells me this isn’t going to go down like LaVar envisions it happening in his head, but we’ll all just have to wait and see. If nothing else, the idea’s definitely ambitious.