LaVar Ball Posts GIF Of Himself Dunking On Donald Trump, Tells The President To Stay In His Lane 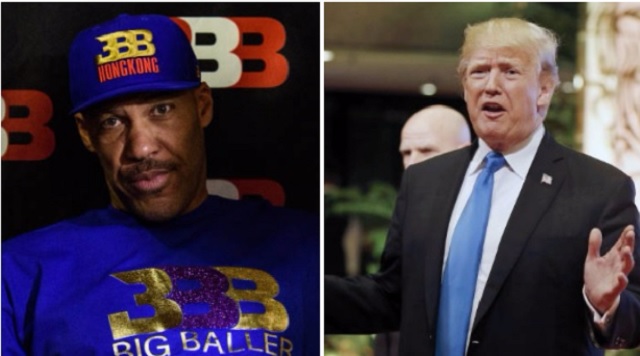 For the past month, LaVar Ball has found himself in a beef with the President of the United States of America.

It all started when President Trump fired a shot at the Ball family and demanded a “thank you” from LiAngelo Ball and his two former UCLA teammates after Trump claimed he personally spoke to Chinese President Xi Jinping about releasing the players who were in trouble for shoplifting in China.

Do you think the three UCLA Basketball Players will say thank you President Trump? They were headed for 10 years in jail!

LaVar fired back at Trump and has since refused to thank Trump for helping LiAngelo in China.

“Maybe we were doing some talking with some other people before he even got there,” Ball said, before adding that the president should deal with political matters, “there is a lot of other matters going around for the president to deal with that’s political. As far as me, let me deal with my son.”

It looks like LaVar is happy to milk his beef with Donald Trump for as long as he can. A few days after going on CNN and claiming that he sent the President a pair of Big Baller Brand shoes, LaVar Ball fired up a hilarious cartoon tweet mocking the Trump with the caption “Stay in your lane”.

The Internet had some pretty hilarious reactions to LaVar’s GIF.

Trumps’ staff holding him back from replying pic.twitter.com/cysi6AdxZJ