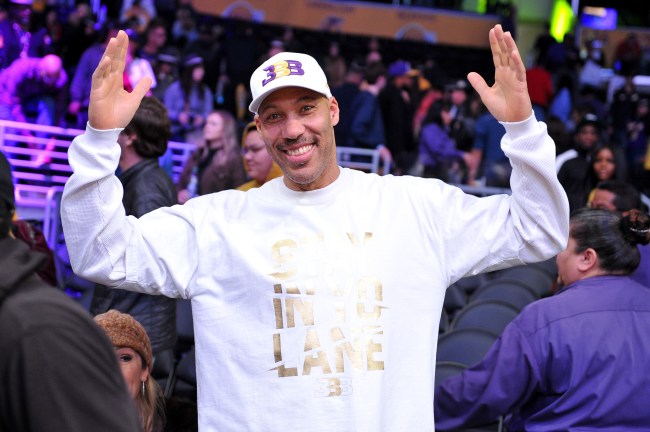 LaVar Ball has gone on record as saying that, back in the day, he wouldn’t just beat Michael Jordan in a game of one-on-one, he’d “make him cry.” He’s created headlines with his outlandish remarks about his sons, while creating a brand — Big Baller Brand — that’s supposed to compete with apparel giants like Nike, Adidas and Reebok, among others. He’s even started his own minor league hoops league to compete with the G-League in order to get some of the youngest stars to show of their skills. But after seeing LaVar Ball shoot a basketball, I call bullsh*t on this guy knowing a damn thing about hoops, proclaiming him as the biggest fraud on planet earth.

Instead of going on on poor LaVar Ball, I’ll just drop this video in of him shooting threes recently after one of his son’s high school games. Needless to say, the guy could build a house with all the bricks he just tossed up. Good F’in Lord.

LaVar Ball showing the crowd that he can still shoot 😂 (via @Ballislife) pic.twitter.com/JQs5gpcVqp

Seeing as how his oldest son, Lonzo Ball, can’t seem to hit the broad side of a barn with his own shot, it’s safe to say that LaVar Ball might want to avoid showing his face around the basketball court anytime soon. My eyes actually hurt after watching this, guys.