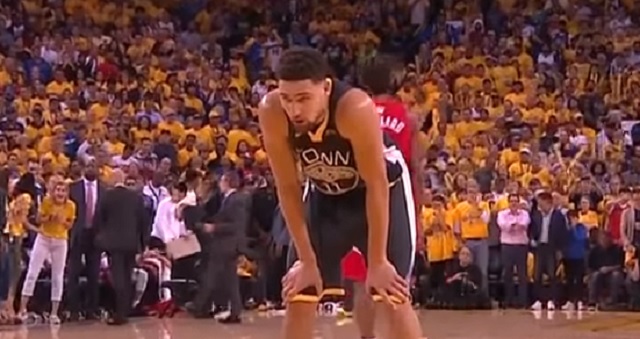 After months of speculation, we finally learned who was going to star in LeBron James’ Space Jam sequel two weeks ago.

Today, TMZ released footage from the set of Space Jam 2 that showed an injured Klay Thompson, who injured his ACL during the NBA finals, walking around in crutches talking to LeBron.

The Golden State Warriors superstar crutched his way on to the L.A. movie set on Wednesday — just weeks after injuring his knee during Game 6 of the NBA Finals.

Thompson was greeted by LeBron James himself — who’s starring in and producing the flick — and the two talked it out for a while in front of the production crew.

In the video Draymond Green could be seen shooting around in a basketball gym set.

Other stars on the set included Anthony Davis and Damian Lillard. The guy wearing #23 appears to be Draymond Green.

We’re told the scene is set at an All-Star game — there doesn’t appear to be any Monstars present!

Space Jam 2 has been shooting all over Los Angeles including at the house of famous NBA superfan Jimmy Goldstein.

LeBron James shooting on the set of SPACE JAM 2 🤩 (via @jamesfgoldstein) pic.twitter.com/6gHL0Egh6D