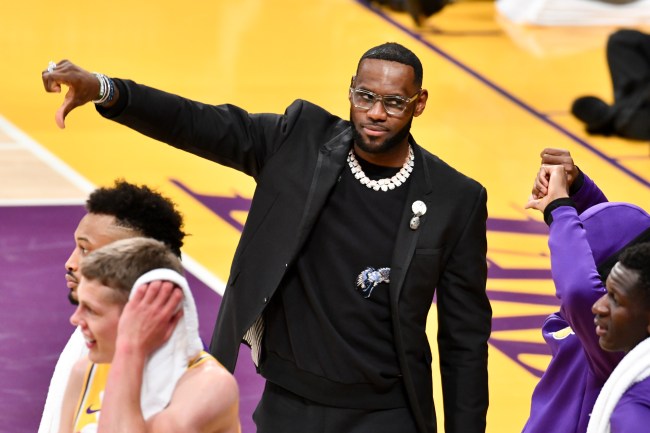 LeBron James could very well go down as the greatest NBA player in history when it’s all said and done. Throughout his career, he’s averaged more than 27-points a game while shooting a 50.4 FG% and 34.3% from the three-point line.

LeBron saw a tiny dip in his 3-point shooting percentage this season, making only 33.9% of 3pt FGs compared to his 34.3% lifetime average but that tiny percentage change might’ve been what gave 14-year-old Gabe Cupps the confidence to challenge LeBron James to a 3-point shooting contest.

This kid must have ice in his veins to challenge the G.O.A.T. to a shooting contest of any type and then actually make it rain threes on ‘Bron instead of folding under the pressure. This all went down at LeBron James’ ‘Bronny’s Strive for Greatness’ game over the weekend. Gabe, who also wears #23, is a longtime teammate of LeBron James’ son.

When it was all said and done, LeBron James flashed a hilarious look to the 14-year-old baller who plays on his son’s team:

You can check out more highlights of the game here with LeBron on the sidelines cheering as loud as any enthusiastic parent in America:

That’s why Gabe Cupps is my HERO 💫 pic.twitter.com/eHuf24IbAE

I’m watching this clip and wondering just how impossible it must be for these kids to stop themselves from asking LeBron James for autographs every single time he shows up to a game. I don’t even care about sports memorabilia. It’s not my thing. But if I’m playing on a team with LeBron’s son I have to imagine that I’m asking my buddy’s dad to sign something every single game so I can at least sell those autographs on eBay.